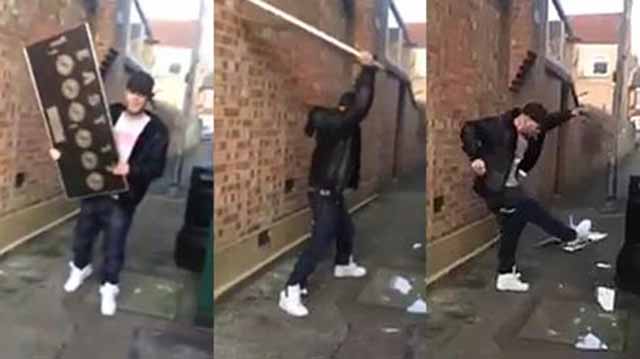 Fresh off the Brian Harvey remix of German Whip we posted earlier, the former East 17 frontman has made his feelings for the music industry (and his former band) fairly clear by smashing up the platinum records he earned with them in the 90s:

Brian posted the footage to YouTube along with this message underneath:

Fuck your record industry, and fuck your weird paedophile world. Fuck you.

The paedo bit is in reference to a (not great) song he just released called ‘The Ring’. For some reason he’s felt the need to clarify on the track’s artwork that he means ‘wedding ring’ and not ‘paedophile ring’. I guess he took some Internet troll’s comments a bit too seriously?

Here’s the track and artwork in question:

He then posted this video of himself tidying up afterwards:

Brian Harvey is no stranger to controversy – he was initially booted out of East 17 after promoting ecstasy during a radio interview. A few years later he accidentally ran himself over while reversing in his car and falling out of the driver’s seat, and just last year he rocked up to 10 Downing Street demanding to speak to David Cameron.