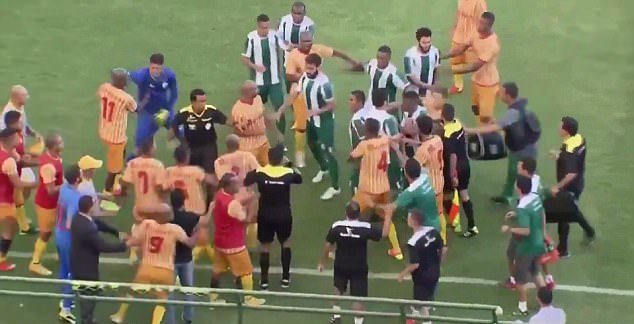 Back in the day, hooligan violence amongst football supporters used to be all the rage, but you certainly never used to see them engaging in full on battles in the middle of the pitch.

Brazilian football seemingly has other ideas though, judging by the scenes recently at the game between Gama and Brasiliense. It all kicked off between the players – which resulted in a massive brawl between all of them – and then a fan tried to get involved by attempting to nick the other supporters’ flag.

That’s when things really kick off – there’s a full on war for the flag, a battle between both sets of rival fans and one unlucky guy gets completely battered and stripped to his underwear. There’s really a hell of a lot going on in this video:

Told you that was one hell of an experience eh? Glad I’ve never been involved in anything like that.

It was pretty harsh where the green guys just target the one guy and take off all his clothes whilst repeatedly kicking him in the head as hard as they can whilst he’s down. They didn’t even manage to get their flag back either. I suppose they got their revenge in the end though.

Football violence is never the answer and that should be remembered from this video. If you need any more evidence of how stupid and senseless it is, then check out these French hooligans destroying a little Dutch restaurant for no reason. What’s the point?