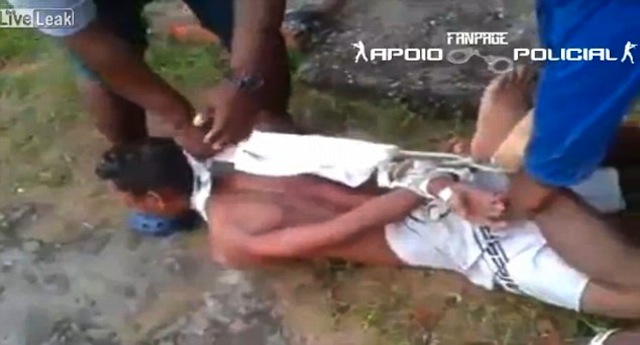 This video is incredibly messed up and uncomfortable to watch, but are the tactics effective in deterring crime?

Having lost faith in the judicial system, Brazilians are resorting to vigilante acts to ensure criminals are properly deterred from committing crimes again after being caught. It is incredibly messed up and uncomfortable to watch, but are the tactics effective?

If you were caught thieving anywhere in the civilised world you’d be arrested, maybe have a short spell in prison and then you’d be back out in no time committing crimes again. For many criminals it’s worth the risk and so the cycle of crime continues.

â˜› Up Next: Man Punches Judge, Is Subjected To Least Surprising Arrest Ever

But watching this video, is there any chance in hell this kid ever steals from a house again? I doubt it. What I have a problem with is this young man already seems to have received a beating prior to the video. But the anthill punishment is physically harmless yet awful enough an experience to make him never want to steal again.

Then again, maybe this kind of thing will only make the kid more vengeful and ready to take out his frustrations on others. What do you think?

Be warned – it’s an upsetting watch: