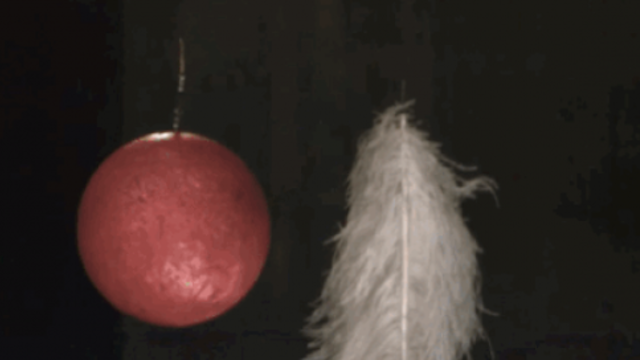 Everyone who has a Physics GCSE knows what should happen in this situation, but actually seeing it is something else.

If you passed your Physics GCSE or even have a basic grasp of the subject, you would know that if objects are caught in a vacuum then they fall at the same rate, no matter what their mass. This is because they’re not affected by a gravitational pull – which is directly related to mass – so there’s nothing causing them to fall faster to the ground.

You might have know this but you might have not, but even if you did then chances are you’ve probably never actually seen it in action. Well, it’s your luck day my friend because Brian Cox and the guys from the BBC travelled over to NASA’s Space Simulation Chamber at the Space Power Facility in Ohio to demonstrate it to us.

Like the title suggests Brian gets a feather and a bowling ball and drops them both in normal conditions and in a vacuum. Even though you know what’s going to happen, it doesn’t make it an less awesome to see it, kind of like the ending of Titanic. At least way better than this ridiculous alternate ending that James Cameron decided to film for some reason.