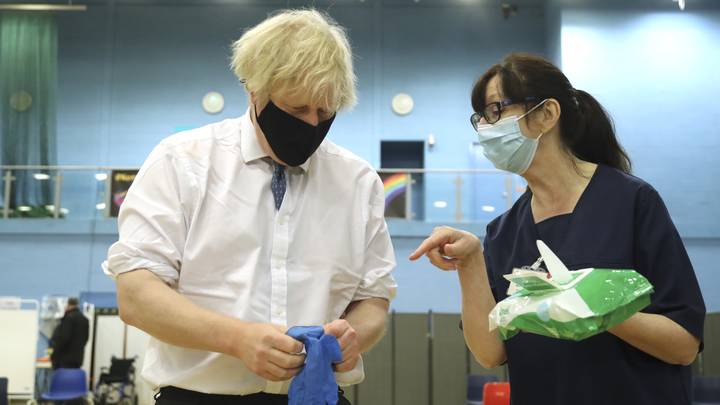 Shockingly, I don’t think anyone in our government has done anything ridiculously stupid this week and given that it’s Wednesday that’s quite a feat in recent memory, but trust our Prime Minister to step up in times of need by coming out with an entirely unwholesome quip about O.J. Simpson when he couldn’t get on a pair of gloves.

For those that are unfamiliar with O.J. Simpson’s murder trial back in 1995 where he was accused of killing two people – including his former wife Nicole Brown Simpson – the case hinged around a pair of blood stained gloves that were found at the crime scene. O.J. struggled with getting the gloves on when he was questioned about them in court, leading Simpson’s lawyer Johnny Cochran to say ‘if it doesn’t fit, you must acquit!’ Catchy – and ultimately successful.

Anyway, now that that context is out of the way, check out Boris’ cool little one liner today when he was visiting a vaccination centre in Cwmbran, South Wales:

‘I feel like OJ Simpson’@BorisJohnson struggles to get on a pair of rubber gloves while at a mass #Covid vaccination centre in Cwmbran, south Wales pic.twitter.com/P2GJ0zAivL

Lol. Not only is that reference wildly inappropriate, but it’s also wildly out of date. Sure, there was ‘American Crime Story: The People VS O.J. Simpson’ a few years ago, but even that one’s probably faded in the public consciousness by now. What’s worse is that this almost definitely wasn’t an offhand remark, but one that was probably scripted and redrafted for hours before it was actually filmed. You really think someone out there could come up with something better than this don’t you?

Anyway, a few of these replies probably say it better than I ever could:

People thinking this a good ‘gag’, it’s not. A good gag would be if someone intentionally referred to his glove issues and getting away with murder. He’s just distracting from his fat sweaty hands.

Why? Because he’s getting away with Murder?

What mindset would come up with OJ Simpson as a joke?

OJ Simpsons is like Mother Theresa compared to Boris Johnson and all the deaths under his watch.

Johnson says he feels like OJ Simpson. But Johnson is as guilty as sin but much more deadly. He struggles with the truth, integrity and competence and over 120000 lives have been lost under his clowning about.
We need change NOW. pic.twitter.com/VkkkCW5TEg

Don’t hold back there guys. Of course, there was a cross section of flag Twitter as well saying that they thought the joke was hilarious and Boris is a good old sport, but their replies aren’t really that funny so I didn’t bother to include them. Feel free to check them out in your own time though.

For more of the same, check out when O.J. Simpson pretty much confessed to murdering his ex wife and her lover. What?