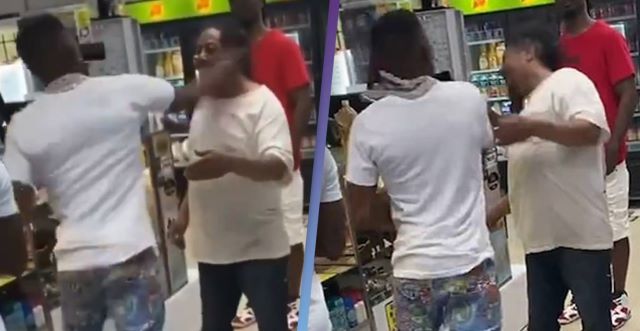 When Lil Boosie appeared on Mike Tyson’s podcast a few months back, Iron Mike suggested Boosie might be a homosexual because he constantly takes digs at transexuals and the LGBT community in general.

But while Mike Tyson might get away with saying something like that to Boosie, some random crackhead in a convenience store definitely won’t, as evidenced by this footage doing the rounds this week:

Ouch – not very nice to see but how could that dude have possibly thought that he was going to escape unscathed after calling the notoriously gangsta Lil Boosie a punk to his face?

But wait! Plot twist incoming. According to TMZ, Boosie actually paid that homeless dude $500 to insult him and he fully knew that slap was coming. Apparently it will be featured in a scene in Boosie’s upcoming track with DaBaby titled ‘Period’. Here’s a longer version the scene:

Boosie paid someone $500 to slap them for his music video with DaBaby 😭 pic.twitter.com/GibsQDBI1U

And the footage of Boosie paying the man off:

All’s well that ends well eh? A homeless dude is now up $554 and Lil Boosie gets to look like a tough guy without actually going to jail for it. Win/win situation! Although despite the fact the man consented to the slap and was compensated for it, there’s plenty of debate on Twitter over how Boosie exploited a homeless drug addict. He basically bought that man’s pride for $554, but that guy was so down on his luck that he was eager to sell it.

I wonder if he bartered at all or just took the first offer from Boosie? Either way that was some quality acting although I guess they were both essentially playing themselves at the end of the day.