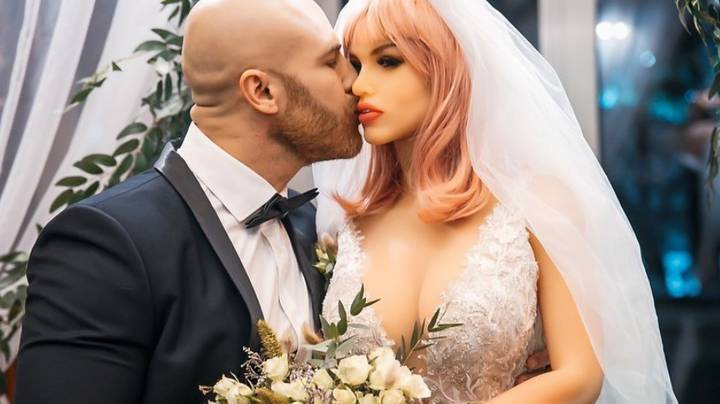 This guy is so weird.

One of the weirder characters on the internet recently has been the (possibly mentally ill) Kazakhstan bodybuilder Yuri Tolochko ,who recently married a sex doll in a lavish ceremony and then decided to cheat on her whilst she was getting fixed after she broke shortly just before Christmas.

There’s no doubting that his story is an unusual one and I assume that’s why he’s managed to amass 100,000 followers on Instagram. It doesn’t look as if it’s going to slow down any time soon either, after Yuri revealed that he now wants to have several fake plastic wives as his next goal. Either that or a big fat chicken for his next wife after he shared a video of him having sex with an uncooked whole chicken on his Instagram profile.

Yeah, you did read that last sentence correctly and no, it doesn’t make any sense. Here’s what he had to say anyway:

I don’t want Margo to break down again. And that means I have to unload her.

I decided that I could have several wives, this tradition exists in some eastern cultures.

I am currently considering two options. I got acquainted online with another sex doll.

I even decided to fly to her, meet her – she lives in Moscow. But they didn’t let me out of the airport, because of the quarantine.

The chicken will be such a sex toy.

I can’t wait for her. This thought turns me on.

After my sex with chicken meat, I really wanted to have such a toy and take care of it.

Remember when I said I thought he might be mentally ill at the start of this article? Everything he’s said and done since then has only made me think that he’s gone even crazier since the last time we heard from him.

Who in their right mind travels to Moscow to meet a sex doll, especially when you know that there’s probably no way of getting out of the airport because of the pandemic? That’s surely up there with the definition of crazy. And this is before we even mention the whole thing with fucking the chicken on an Instagram video? What the hell is with that?

Guy really does need someone to help him sort his life out and I hope that someone actually does before he ends up doing something crazy like using a sex toy to rob a bank or something and ending up getting seriously hurt. Please, stop him from inflicting this horrendous content on us, someone.

For more of the same, check out this girl discovering her boyfriend’s horrific homemade sex doll. Awful.