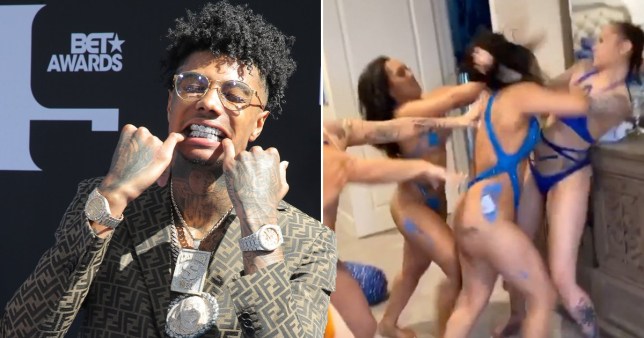 Blueface is a 23-year-old rapper from LA who I’ve never heard of, but apparently he’s rich enough to live in a nice mansion and has an estimated net worth of $4 million. Alright for some.

Well it looks like Blueface isn’t taking social distancing very seriously as he decided to film a music video at his home on the weekend and invited a whole bunch of Instagram hoes round to participate.

Unfortunately, personalities clashed, tempers flared, and the ladies ended up battering each other:

Another of the girls took to Twitter to mention that she was a victim of racial abuse (by a lighter-skinned black girl) and had her weave ripped off:

Y’all… Blueface invited me to his video shoot and this girl had the nerve to say, “leave you ugly darkskin bitch” “you bald because you dark skinned you ugly bitch” “yo kick this black hoe out”…all for no reason? What is this bullshit occurring for in 2020? pic.twitter.com/G7Ok9Xol6w

To be fair everyone in that house probably has something worse than coronavirus, but that’s no reason to flaunt lockdown rules in order to shoot a music video, is it? Very irresponsible stuff.

Of course Blueface’s way of dealing with the situation was to film the ladies beating each other up and blast the footage all over his social media. I guess that’s marketing 101 when you’re a 23-year-old rapper.

For footage of a young rapper’s mum coming home early and shutting down his music video shoot, click HERE. Not very gangsta.