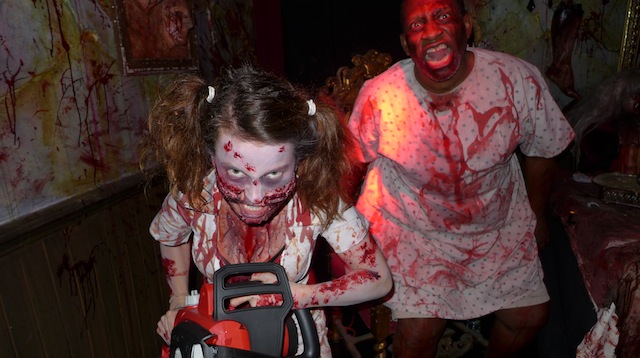 Ever wondered what really goes on behind the scenes of those spooky Halloween Haunted Houses that always pop up? Find out here.

I don’t know about you guys but I enjoy nothing more at Halloween than finding one of those really scary horror mazes and hitting it up with a bunch of my buddies and getting the absolute shit scared out of me.

Blood Manor is one such haunted house – alongside about 30 others – that you can find in New York City and I for one would really love to go over there one year and check them out. Apparently Blood Manor is the scariest haunted house in New York City (although a lot of venues seem to offer that title) and takes place in a haunted house with a bunch of different locations such as the Fog of Death, Vestibule of the Undead, Rue Morgue, Steampunk, Frozen Alive, the Banquet of Torture, Jungle Terror, Carnival of Souls and the Shocktorium. They all feature a bunch of live actors jumping out at you and chasing you with chainsaws, and an average of 37 gallons of blood/blood substitute is used every night. Sounds scary.

However, if you walk through it through the day and know all of the tricks of the trade, then it’s nowhere near as scary as it is in the dead of night on Halloween. This video explains how some of Blood Manor’s – and probably many other haunted house’s – tricks work and might take the fun out of it slightly, but it’s still fun to understand how some of this stuff works.