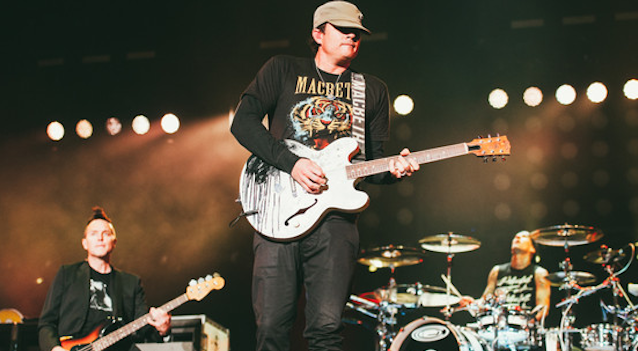 They’ve never had a great live reputation, but seriously?

Blink 182 are one of my favourite bands ever and I’m not afraid to admit it – they were the first band I went to see, Enema Of The State is probably my favourite record and like so many others they probably inspired me to start a punk band. No shame – I’ve even used their lyrics as pick up lines.

However, they’ve always had a bit of a reputation for being fairly ramshackle live, mainly because Tom Delonge can’t actually sing or play that guitar that well, even though he’s made millions of dollars from doing so. I managed to catch Blink a couple of years ago though and they were remarkably good and it seemed like Tom had actually taken the time during their hiatus to actually learn how to play guitar and sing.

Unfortunately though it seems like he’s managed to forget everything he learned if this performance at Reading over the weekend – which has just become available on BBC iPlayer – is anything to go by. Someone I know described it as an hour long stroke and I can’t really think of a more apt description. His guitar sounds horrible, he plays the wrong notes and wrong chords and wrong rhythms, sings the wrong words and generally sounds terrible, all whilst having a really weird look on his face kind of like he’s having a stroke and generally just being a complete and utter weirdo.

Normally Mark Hoppus kind of saves some face but he’s almost as bad with an out of tune bass guitar, bad singing and generally just looking way too old to be involved with these kind of shenanigans. There’s one bit where he sort of just does a comedy walk across the stage and you can just hear everyone watching it being like ‘no dude’. Even Travis just seems like he’s half assed it and can’t really be fucked. The whole thing is really embarrassing basically.

It’s all available on iPlayer if you want to each it all, but you can check out one of the worst versions of All The Small Things (even worse than Jedward’s) below. It’s kind of like one of those videos where someone overdubs a really bad version of a famous song over a live video of the band playing it, except this time it’s real.

Or maybe some shit 14 year old punk band covering it down at your local working man’s club. No wait – that would probably be better than this pile of trash.