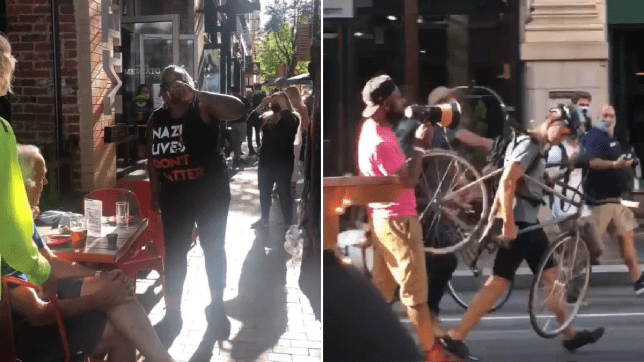 Black Lives Matter protests may have died down over here, but they’re still raging all over America and whilst the majority of them seem to be sensible and respectful, you still get some idiots like the people in the video below that ruin the image of the protesters for everyone.

This video comes from over in Pittsburgh, where people are protesting following the release of another video of a black man being effectively murdered by police – this time a guy called Daniel Prude from Rochester, New York. However, I don’t think it’s that good a method of protest for one of them to constantly shout ‘fuck white people’ at a bunch of people eating their dinner at a restaurant, and then getting into an argument with them and picking up their drinking and downing it.

I don’t think that’s going to win them any friends at all and is probably going to alienate the message that they’re trying to get across, but don’t just take my word for it, have a look at the footage below and see what you think:

That just comes across as obnoxious and annoying really doesn’t it? I don’t know if the old couple did anything to warrant that reaction, but if they didn’t you could argue that they’re being profiled by the protesters just like black people are – although obviously with much less serious consequences and connotations.

Protesters really need to not act like this or risk having their whole message undermined by people on the other side of the political spectrum who are just going to focus on their behaviour and call them out about it. Be more sensible about it please.

For more of the same, check out these Black Lives Matter protesters accosting more diners for not raising their fists in solidarity with them. Come on guys.