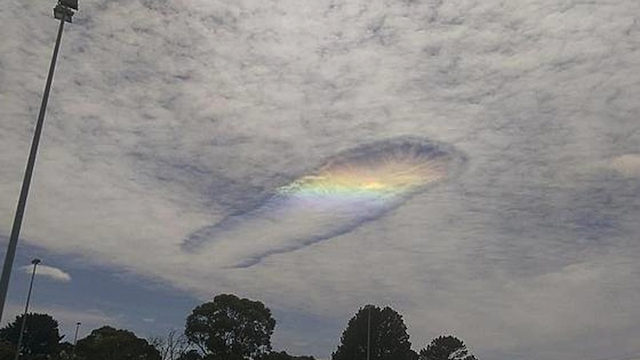 It looks pretty much how you would imagine the gateway to another dimension would appear.

Nothing much probably happens in the sleepy seaside town of Wonthaggi (132km out of Melbourne over in Australia), so it makes sense that when something that looks like it could be the start of an alien invasion goes down that everyone there freaks the fuck out about it, especially given the recent news about alien clouds.

That’s exactly what happened yesterday when a really bizarre looking cloud appeared over the city. It was first spotted by a resident named Carol who must live in the past or something because her response to this was very 1950s – she decided to call up the local radio station 3AW and ask them what they thought was going on with it.

Other people in the city seem to know a bit more about technology and life now though as they instead took to Twitter to register their confusion over it and speculate on what it could be. Granted, that wasn’t exactly much more of a useful response but it is more keeping with people’s reactions in the year 2014.

.@TomElliott3AW: “This weird cloud formation reminds me of the spaceships in Independence Day.” #weirdrainbow pic.twitter.com/IQUuSV9FQL

Photo: Looks like the end of the world is currently happening in Wonthaggi, Australia… http://t.co/r93EHwhWyM

What’s going on over Wonthaggi? pic.twitter.com/UZQXkvdgb2

@3AW693 @ABCNews24 @MikeLarkan any idea what was going on in the sky over wonthaggi this afternoon? pic.twitter.com/jOFb7gpgan

Fortunately a guy called Michael Efron from the Bureau of Meteorology was able to explain the phenomenon:

It looks like a fallstreak cloud, also known as a punch hole cloud.

They form when the water temperature in the cloud is below freezing, but the water has not yet frozen due to a lack of ice nucleation particles. In this case, when the water does start to freeze, it falls down to the surface … so you’re left with this cloud surrounding it, this clear area.

Phew. That was a close one. To be fair, if aliens were going to invade were they really going to pick the middle of nowhere like Wonthaggi to do it? Probably not, but then we wouldn’t know anything about their motivations if they were so it isn’t that surprising people got freaked out, especially when it was probably the most interesting thing that had happened in the town in the last 1000 years.