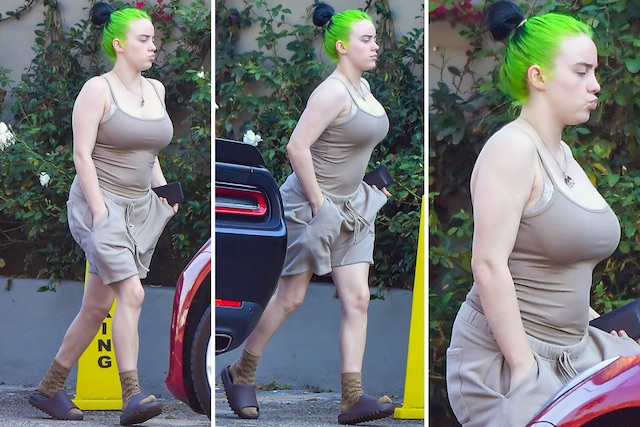 Fans have stood up to the fat shakers.

Billie Eilish is one of the biggest superstars in world music despite only being eighteen years old and sadly that also means that even though she’s only eighteen years old that she’s also the target of some of the most vile abuse on the internet. You’ll see that in this article.

If you’ve ever seen a picture of Eilish performing or even just hanging out, then you’ll know that she normally wears really baggy clothes and looks like a real badass in them, but yesterday pictures emerged of her hanging out in Los Angeles in slightly more casual gear and of course the internet wasn’t having that at all. It started with this tweet, but then escalated from there:

I just saw the new billie Eilish photos OMG when did she get so fat???

She (#BillieEilish) looks fat, lethargic and depressed incidentally all of which are symptomatic of being massively overweight, none of which are healthy by any stretch of the imagination. https://t.co/o18iVOhRmF

Billie Eilish look like a fat fuck who gained 20 pounds

Awful. Thankfully, at least some corners of the information super highway were quick to call this kind of behaviour out and remark that people who were body shaming and taking the piss out of an 18 year old girl for wearing what she wanted isn’t productive or even basic decent behaviour by any stretch of the imagination. Here are a few of the best takes:

Billie Eilish is beautiful! PLEASE, do not body shame her, or anyone for that matter. Body shaming is not “news” or “gossip” it’s HARMFUL and UNACCEPTABLE.

there is nothing greater in this world than billie eilish being confident in her body, we saw her growing and everything and
i feel more than like a proud mom pic.twitter.com/luW4EfZYkz

In 10 months Billie Eilish is still a normal human being who has a normal human body. When Chadwick passed away everybody on here talking about how we can’t judge people anymore because they may be dealing with things we don’t know about, but y’all just forgot that a week later😒 pic.twitter.com/0AzIaYqrJ4

This Billie Eilish stuff is messed up. She’s 18. She was probably just going to the shop or something. Who the fuck cares? pic.twitter.com/B97Sec7VAr

Gotta say I agree with them all. Who care what Billie Eilish looks like underneath all those clothes? Just because she’s a global superstar doesn’t give lame ass incels the right to comment on her clothing choices or the fact that she doesn’t look super excellent in one of her photographs, or even that she may have put on a bit of weight either.

People need to grow up and stop wasting so much time calling people out on the internet for redundant reasons like this and focus on improving their own sad little lives. The internet is such a shitty place sometimes, but the fact so many people spoke about this proves that it can be an awesome place too. Let’s have more of that please.

For more of the same, check out when Billie gave the jacket a superfan gifted her to the charity shop. The fan was devastated.