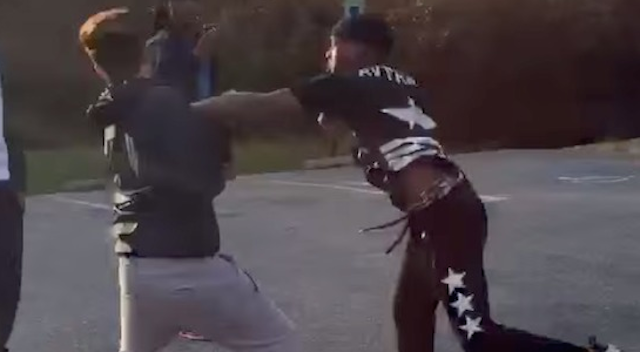 A boxer takes on a street fighter in a car park. Let’s go!

The street fights we normally feature here on the site are normally gnarly brawls where people get the absolute tar knocked out of them, or sucker punched and KOed when they aren’t looking.

This one is completely different. It’s kind of like they’re actually in some kind of MMA/boxing/Fight Club kind of deal as they’re probably squaring up to each other in a makeshift ring made by the bodies of their buddies, in what looks like an organised fight. The white guy is going into it with more of a boxing mentality whereas the black guy is more of a street fighter crossed with Floyd Mayweather.

It’s an interesting clash of styles but the black dude gets the best punches in by far. The thing is most of them would have floored a normal fighter but this white boy just takes them and keeps on going. Props.

Even though there isn’t a winner and their buddies break it up, it’s still unlike any street fight I’ve ever seen before and it deserves respect for that. Get these guys in the gym and get them fighting for real because they’ve both got some skills.