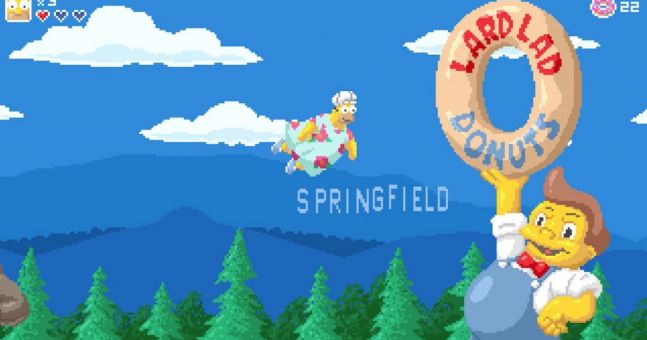 Despite the fact that it’s been on for 30 years and there have been countless attempts, there are very few Simpsons games out there that are actually any good. Sure, the original arcade game was incredible, but ever since then it hasn’t been so good. Bart’s Nightmare anyone?

I figured that must be the reason why someone decided to create this 16 bit version of one of the best episodes ‘King Size Homer’. That’s the one where Homer puts on loads of weight so he can work from home due to being disabled and gets that dipping bird to hit the Y key all the time. Classic episode.

Anyway, in the game it’s kind of like R Type or something in that you control Homer in his muumuu eating donuts, flying through the sky and trying to avoid the bad guys. Sadly it isn’t playable, but it’s still kind of fun to watch:

Not sure how you’re supposed to actually avoid any of those enemies as it doesn’t seem like you can do anything except move up and down – and definitely not fire any bullets or anything – so maybe the dude needs to have a rethink before he turns it into an actual game. Would probably kill an hour or two in the office and it would be fun just playing it to look at all ‘The Simpsons’ references he would no doubt include.

For more Simpsons, check out the feature length version of the McBain movie. It really does exist.