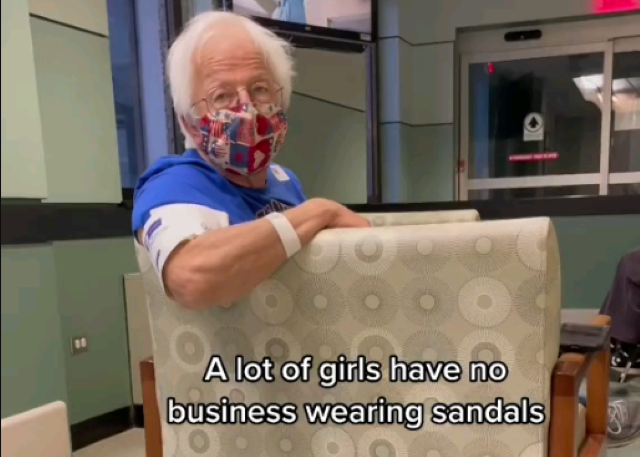 A Bernie Sanders lookalike has been nicknamed ‘Bernie Sandals’ by the internet after footage of him creeping on a young woman in a hospital waiting room went viral.

The old man shamelessly gazes at the woman’s feet non-stop, because I guess he needs to make a strong memory of her feet before the Alzheimer’s wipes the image away from his brain for good. He even throws her a bunch of compliments:

Blimey, I don’t even want to imagine what his other hand is doing. You just know grandpa took the memories of those feet back home and wanked himself into oblivion as soon as he was back in the front door. Luckily for him the woman found some humour in the situation, and was possibly even a little flattered? Although it’s one thing to appreciate nice features on a person and quite another to turn your whole body and stare at said feature like it’s a TV. I guess this old man is way past the point of giving a f*ck.

P.S. Feet don’t do anything for me, but I was hoping she would at least show her feet at some point so we could see what all the fuss was about. Give the audience some context!

Meanwhile over at some swimming pool, a middle-aged creep got confronted by a group of young women after they caught him taking pictures of them. Yikes.