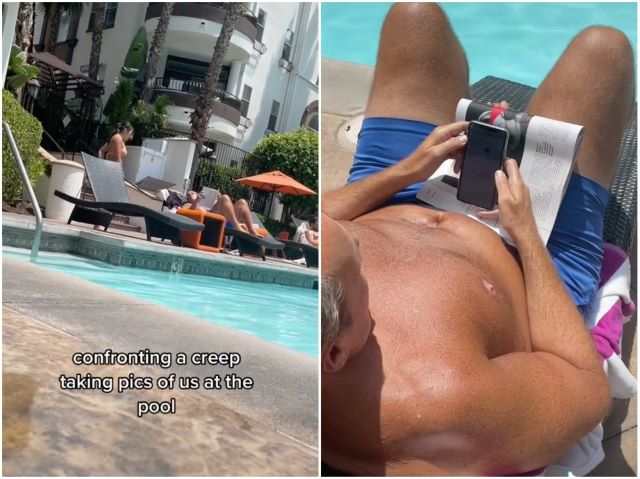 A group of girls have shared the moment they confronted a man who was covertly taking photos of them by the swimming pool, though not covertly enough evidently.

TikTok user @maiphammy posted a video of the encounter captioned:

Stay safe out there ladies. Decided to confront a creep taking pics of us when we were just trying to hang by the pool. HE TRIED DENYING IT.

Wow, how embarrassing. Put some sunscreen on those nipples, sir! There’s some debate online over how this man is within his rights to take pictures and film whatever he wants in a public space, but hey nobody said it was crime; just slightly creepy and perverted. Which he fully understands because he couldn’t delete that footage fast enough when confronted.

The funniest part is those same girls probably went home and posted pictures and videos of themselves doing splits and twerking on Instagram and whatnot. Maybe they just wanted to be sure he didn’t get any freebies without subscribing to their OnlyFans?

For footage of another creep approaching a teenage girl while she’s livestreaming and trying to ‘befriend’ her, click HERE. Girl couldn’t look more uncomfortable.