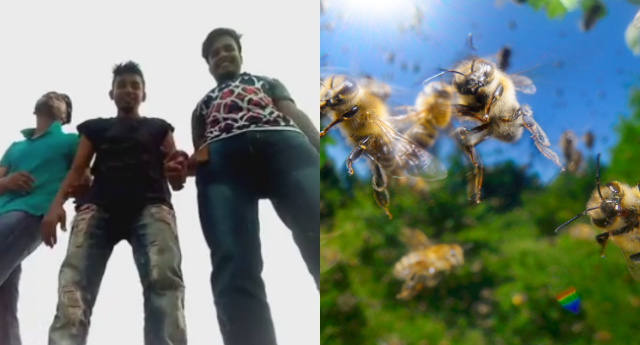 Usually, bees aren’t out for blood unless they feel they’re being attacked, but I guess they’re not big fans of Indian rap music either as these three lads over in Mumbai found out.

Might it have been Wu Tang Killa Beez coming to save the rap game from this trio?

Too funny. What are you even supposed to do in that situation? Probably run for your life as fast as you can like these dudes did. It actually sounded like a small village was being attacked as the video went on there, so hopefully nobody was stung to death or anything. I guess in some parts of the world being swarmed by a cartoon amount of bees is just something that you have to deal with now and again.

In fairness to that one kid, those actually sounded like some fire flames bars he was spitting before the bees showed up to ruin the show. Not that I have any idea what he was saying – can anyone in the comments enlighten us?

For an insane video of a murder hornet brutalising a mouse for a full minute, click HERE. Yeesh.