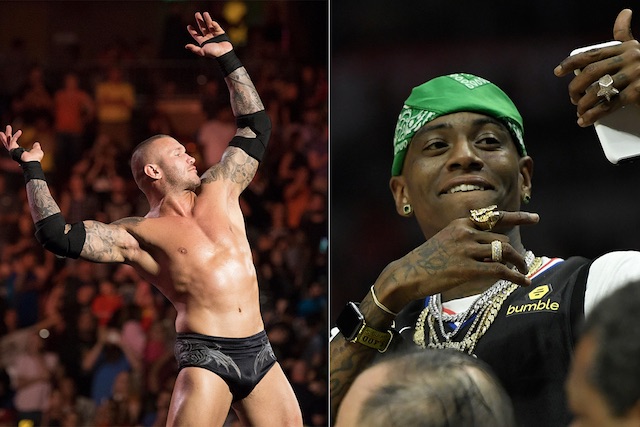 You might remember a couple of weeks ago that Randy Orton and Soulja Boy got into a beef together on Twitter about whether wrestling was real or not and it looks like neither one of them is going to back down on this feud, probably eventually settling their feud in the squared circle itself because that’s normally how these things go.

Anyway, the two of them really went at each other in this latest exchange:

You a bitch @RandyOrton and I mean that 💯 pussy

My dick taller then you. Weighs more too. Go to bed you fucking infant. You’re welcome for the boost. Go choke on a keyboard. https://t.co/CQUn6WHpGa

Bro you wear thongs. Leather thongs at that. Stop the cap 🧢 my money taller than you. To be real I think you scared of me. All that talk I’ll smack the shit out u 👋🏾 https://t.co/Rr7Nua2Nj8

Ouch. Definitely think that Randy came off the best in that exchange – Soulja Boy sounds kinda lame and weak in the last one – but are these two just going to keep going at it over on social media or turn this into some kind of celebrity boxing match/wrestling match? Wrestlemania is in a couple of weeks and you could defintiely see Soulja Boy getting involved somehow with Randy Orton currently scheduled to fight The Fiend. Let me in Soulja Boy.

For more of the same, check out this story about a former WWE diva saying that Randy Orton used to bully her. Damn.