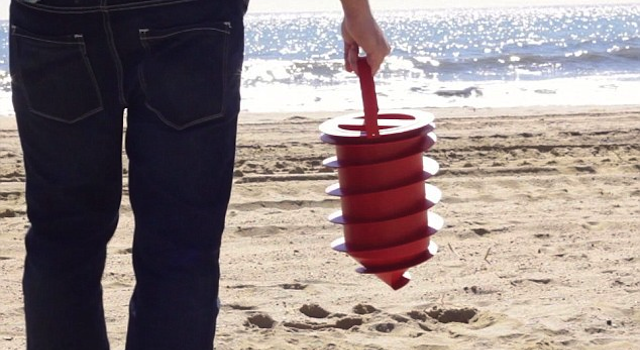 The Beach Vault could finally solve the problem of where you leave your valuables when you’re hanging out on the beach and don’t want them to get stolen.

This could just be one of the best inventions ever as it’s a completely dope solution for a problem that everyone will have faced at some time in their life and that nobody ever had a decent solution for. Until now.

Marcal DaCunha has invented the Beach Vault, which is a unique locker that can screw into the sand and can store those essential valuables you’ll need to take to the beach but might be a bit worried about losing if you just leave them out whilst you’re chilling on your towel catching some rays. You know, stuff like a wallet, mobile phone and your keys. Maybe cigarettes too if you’re that kind of guy/gal.

The trick of the Beach Vault is that once you’ve buried it in the sand you can put a towel or a pillowcase over it and any passing thieves are none the wiser that it’s even there. What’s more, even if they do notice that it’s there you’ll probably be lying on your towel – with the beach vault underneath – so there’s pretty much no chance of them stealing your stuff. Especially when some other schmuck just has their wallet lying around on the beach like a moron.

Although the obvious counter argument of the Beach Vault is that it’s just as easy to steal as a handbag if it’s left unattended, the fact that it’s hidden in the sand under the ground and towels is its unique selling point and to me that does sound a lot less likely to get stolen than a loose piece of luggage/loose valuables. The Beach Vault is also waterproof which makes it slightly more of a desirable piece of equipment for the beach than a plastic bag or whatever you’re keeping your valuables in at the moment.

Marcal is currently using a crowd funding website to try and raise money for the manufacture of the Beach Vault, which he expects to sell at around £18 when it finally hits the market. You can check out a video of it in action below if that sounds like the kind of thing that is going to float your boat.

â˜› More Beach: Is This The Greatest Beach Soccer Goal Of All Time?