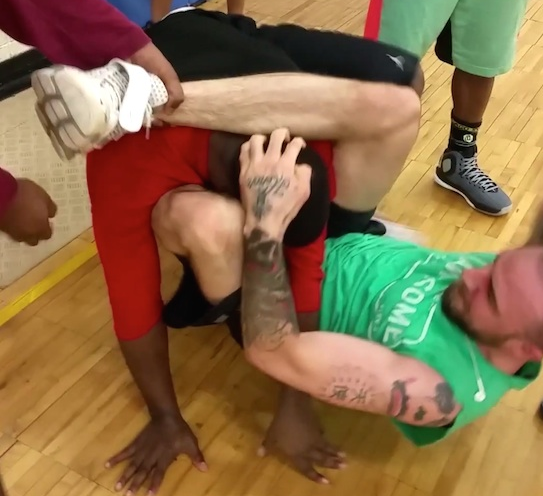 If you’re talking smack to someone on the basketball court and then decide to take a swing at them, you probably want to make sure that you can at least kick the guy’s ass before you take that swing. What you definitely don’t want to do is take a swing at an expert in MMA, because unless it connects then you are looking at a world of hurt coming up.

Unfortunately, the guy in this video didn’t take my advice. I’m not really sure why the two people in the video are talking pum pum to each other – I assume because one of them isn’t so hot at basketball or something and has been letting the team down – but it quickly escalates into a fierce debate, with one of them challenging the other to a one on one match for money. For some reason the one guy doesn’t want to do that though and after a bit more goading, one of the guys swings at the other one. Big mistake. The other guy is on him in a flash and threatening to rip his kneecaps off.

We don’t get to see that though, because some woman comes over off screen and tells them to break it up. I think that’s the funniest thing about this video – that two tough guys are going at it, yet they both stop fighting when some woman comes and tells them off. Pussies. Although maybe she was the woman who pulled off this incredible sucker punch during a women’s basketball match, in which case it’s probably understandable that they would be scared of her.