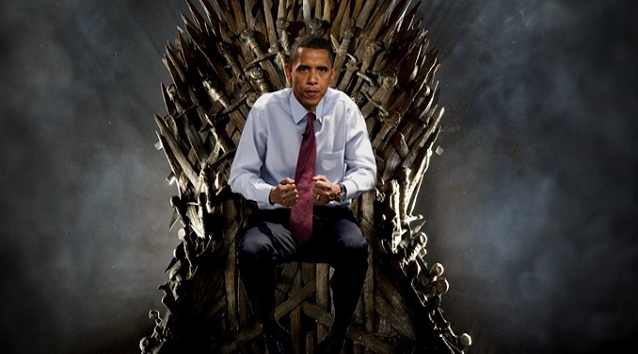 More information on why Barack Obama is a complete sick head.

Most people know that HBO make the best TV shows and it seems that one of these people is Barack Obama.

He apparently likes the TV channel so much that he approached the chief executive of HBO – a dude called Richard Plepier – at a state dinner for the President of France Francois Haollande and demanded that he receive advanced episodes of True Detective and Game Of Thrones so that he could enjoy them over President’s Day weekend.

Allegedly all he said to Plepier – and this is according to the New York Times, which is a pretty reputable source – was ‘Where is my True Detective and Game Of Thrones?’ He probably should have added a ‘baby’ on the end of it to sound like even more of a sickhead. Apparently he was so serious about this that he waved over a White House aide to make sure that Plepier knew exactly where to send the DVDs.

Unfortunately there wasn’t any word from the White House as to whether Plepier complied with Obama’s request, but it’s probably hard for him to deny the leader of the Free World. In any case, he can probably trust Obama not to post spoilers as he would be the moss unpopular President in history if he did.

Although this story isn’t quite as cool as Bill Clinton using his power as the President to seduce Liz Hurley, it’s still pretty awesome that Obama is using his power to do something cool like getting advanced TV episodes of his favourite TV shows. I mean you might as well right?