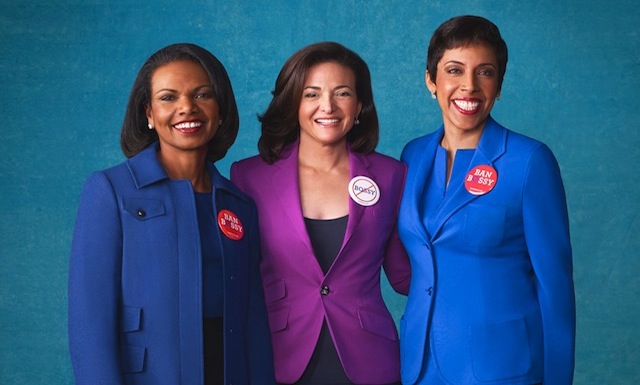 There’s a massive feminist movement going on where they’re trying to ban the word ‘bossy’ from the English language – just what in the hell is going on exactly?

You might have heard about this campaign spearheaded by a lady named Sheryl Sandberg — the COO of Facebook – trying to get the word “bossy” banned from the English language, because it’s a negative putdown that stops girls from pursuing leadership roles. Sounds a bit silly doesn’t it? When I first saw the headline I skimmed past it because I assumed it was some kind of fake Onion type news story. Days later it’s still all over the web and turns out it’s absolutely for real.

“We call girls bossy on the playground, we call them too aggressive or other B-words in the workplace. They’re bossy as little girls, then they’re aggressive, political, shrill, too ambitious as women.”

Solution = ban the word ‘bossy’ altogether. Sandberg has Condoleeza Rice on board the ‘Ban Bossy’ campaign, and people like Sheryl Crow and Beyonce have backed the movement too.

â˜› Up Next: Science Says That Blow Jobs Are Good For Women’s Health And Fight Depression

So what the fuck is going on exactly? Because it doesn’t make any more sense no matter how much I think about it. Is banning the word ‘bossy’ really going to change the world? Is it going to make women bolder in their career moves? How does one even go about banning a word? Are there going to be ramifications for people who use the word? Are we even on planet Earth anymore? Is this actually a real conversation?

Basically, this Facebook COO got called ‘bossy’ once and it hurt her feelings and now she wants to ban the word forever. That’s what happens when you become COO of Facebook — the power goes to your head and you think you have the power to ban words from the English language and anyone who doesn’t agree with you is a misogynist or whatever. Unbelievable.

Meet The Most Whipped Man In Britain