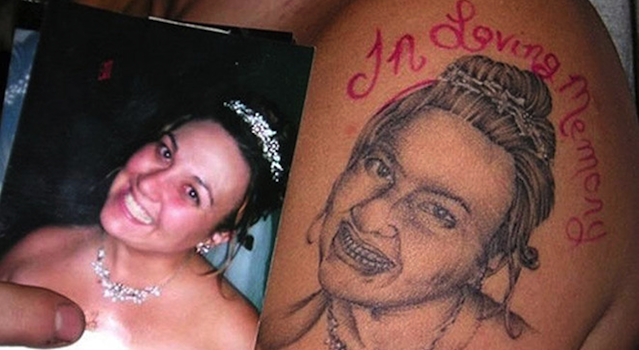 People should really think before they give themselves the worst tattoos in history, but none of these guys did.

I mentioned recently that we love a good giggle at all the shit tattoos in the article I wrote about the retard who got a Nando’s tattoo scribbled on his butt (admittedly a fairly decent tattoo, although the thinking behind it was somewhat ridiculous) so it seems only fitting that when this new crop of ridiculous tattoos found its way onto the internet that I immediately featured them and wrote about them.

Prepare to be amazed/shocked and possibly even disgusted with the stupidity that these people exude.

More Awful Tattoos: This Is Why Retards Shouldn’t Tattoo Well, this looks like it was performed by the left hand of a right handed tattoo artists. It’s obviously meant to be the birds of peace although why one of them is blank and the other one looks like it’s from Bulgaria/Italy/Mexico (don’t worry, I had to Google those) is beyond me.

I guess maybe there’s some kind of symbolism behind them, or more likely they probably just ran out of ink at the tattoo parlour and couldn’t afford to buy any more. I’m not sure what anybody is ever thinking getting their fucking eyebrows tattooed onto their faces!? I mean the first girl is bad enough but getting them replaced with some kind of branches with leaves on? I guess it’s kind of gothic/elven but do you think that this person knows that they’re on her face forever and she’s not going to be hanging out with goths/elves for the rest of her life necessarily!? Although she may be forced to looking like that.

As for Max, that’s a fairly terrible tattoo but I’m sure there’s a good sentiment behind it. Maybe next time though match the amount you spend on it with the sentiment you’re feeling. Although in fairness YOLO has gone on a lot longer than anyone ever expected, I think getting it tattooed on your arm is really going to be a bad idea in the future when you’re a parent with responsibilities and that crazy friend who never settled down is trying to get you to stay out drinking with him on a weeknight by pointing at your arm repeating YOLO over and over again.

If it turns out that this belongs to that crazy friend, then it’s probably only going to make him even more annoying than he already is. Well this must have seemed like a really good idea at the time: ‘What can make my horrible dragon scale esque neck tattoo with a picture of some guy who looks like a cross between Christopher Columbus and Henry VII on it even worse now that it’s all completely filled in? Oh yeah I know, I could tattoo a pair of glasses over my eyes in some kind of bizarre reverse payback for all the years of being bullied I received at school.’

And it worked – I mean look how plussed that babe in the photograph next to him is. OK so obviously the spelling mistake on this one is fairly embarrassing, but can we just talk for a second about the font? It it even actually a font or is that way too nice a thing to say about it because it looks like some kind of play dough kind of font a little kid or Neil Buchanan might come up with.

In short it’s fucking lame, and I doubt anyone is going to be discouraged from dishonouring this dude by this cruddy tattoo, in fact it’s probably made him more of a target if anything. I’m not sure if these have been included like this because they’re from the same person, but I’m hoping they are and they both form part of the poor guy’s family which looks as though it consists of a girl who looks like the love child of Wednesday Adams and Uncle Fester and a heart from Resident Evil. You can choose your friend, but even though you can’t choose your family you can still choose your fucking tattoos dude, Jesus Christ. Well, this is unfortunate. What exactly is the point of getting a chequerboard tattooed on your face? Other than perhaps to blend in with the chequerboard wallpaper behind you I suppose. Truly perplexing. I’m not sure this phrase even makes sense despite the fact that whoever tattooed it can’t spell decisions or do nice fonts because those curves on everything are fucking horrible. It’s the kind of thing you might think was cool when you were 15, like Dready jeans. Truly revolting. Wow. I wouldn’t want to meet this guy in the goth club, where he would inevitably be wearing some kind of vest so everyone could see that he was GRIM.