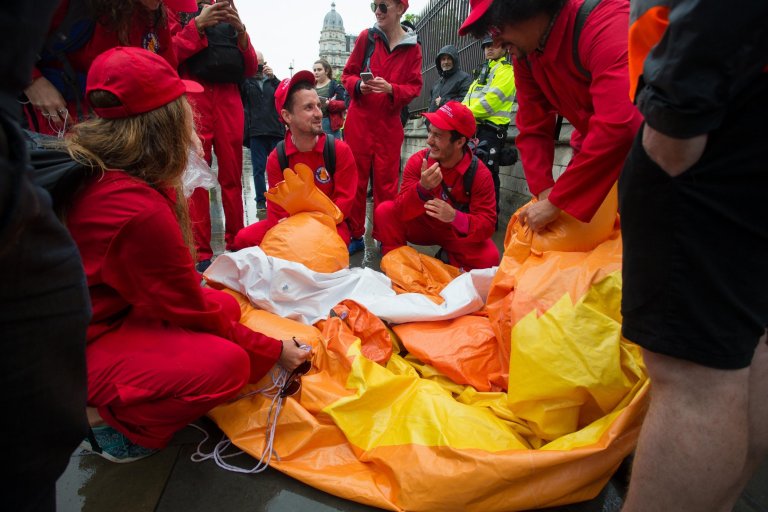 It’s getting messy out there.

Donald Trump’s visit to the UK has been full of stupid things happening, both in the immediate vicinity of the President and all over the country and the whole vibe of it was probably summed up yesterday when a giant blimp depicting him as a baby was stabbed by a Tommy Robinson supporter brandishing a pair of scissors.

The blimp was flying in Parliament Square yesterday in front of Trump’s motorcade – although he said that he didn’t see it and instead insisted that thousands of people lined the streets waving American flags instead – when a Tommy Robinson supporter named Amy Beth Dallamura live streamed herself via Periscope taking a pair of scissors to it. She goes by the name Based Amy and has been frequently seen at Robinson’s rallies in the past. She said that popping the blimp was a birthday present to herself.

You can watch the footage below, where Amy is eventually taken into custody. It’s unclear at this point whether she’ll face any charges:

Damn – she cut open her hands and got arrested by the police hey? I gotta say she was being a major dickhead when the police stopped her and tried to search her, which is why she’s gonna find herself in a massive mess. Probably wasn’t a good idea to lie on her own camera and say that she fell off her bike either which was why she was bleeding. Hope it was worth it.

The bursting of the blimp signified a sad day for anti Trump protesters, as only about 30,000 people showed up when 250,000 had been predicted. Maybe that was because it was a Tuesday and it was raining, or maybe it was because Trump hasn’t really been at the forefront of our collective minds with all the nonsense surrounding Brexit going on this year? I don’t know – I just know that there weren’t thousands of Trump supporters out there either. Why has every part of the media gotta lie about everything?

It also looks as if the blimp might not be able to make it to Ireland either, where it was scheduled to follow Trump on his little trip. Maybe they can take this talking robot of the guy sitting on a golden toilet instead? Probably have around about the same impact.