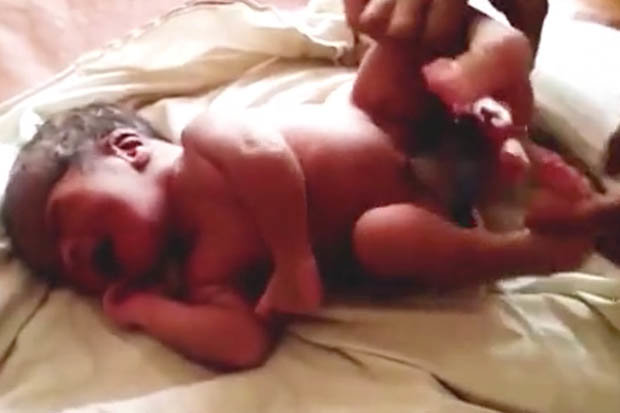 Hearing about a baby being born with two extra sets of legs and an extra penis isn’t really what I would use as the criteria to call it a ‘miracles of God’, but that’s what people are doing over in India where one such baby has entered the world.

The baby was born in the northern city of Gorakhpur as the child of labourer dad Bulham Nishad and mum Rambha. It’s thought that the extra appendages are the result of a parasitic twin – this is a condition where an identical twin dies within the womb, yet the other child is born with their limbs still attached.

This is a very rare occurrence and apparently only happens to one in a million babies. Nevertheless, the people of India didn’t want to hear this and started a massive pilgrimage to see that baby. You think maybe they should just listen to science for once or look at this video on the internet to see it rather than upping sticks and just leaving right there and then? Just saying it might be a bit more of a useful idea long term. Just saying.

Hopefully this baby ends up surviving and living a long and healthy life. Fairly sure he won’t end up being our master/God/whatever though. No matter what these Indian people think.

For more of the same, check out this guy with two dicks doing a Reddit AMA. Pretty illuminating.