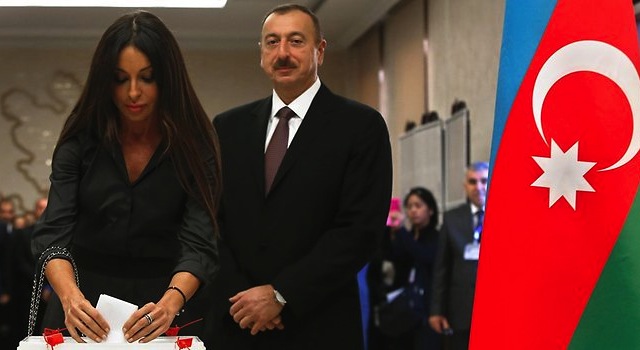 Ilham Aliyev was re-elected as the President of Azerbaijan last week with nearly 85% of the vote. The result was announced the day before voting had started.

I bet you didn’t think that you would learn a fun fact about Azerbaijan today.

The Republic of Azerbaijan had an election a few days ago. The incumbent candidate was President Ilham Aliyev who won by a landslide, with nearly 85% of the vote. Mr Aliyev was so confident of victory that he didn’t even run a campaign. After the results were announced, the President called the election “a triumph for democracy”. Yeah, alright mate.

The thing is, President Ilham Aliyev is to democracy what Simon Cowell is to the music industry. In 2003, he inherited the presidency from his father. In 2009, he abolished the two-term presidential limit in a controversial referendum so that he could stand for a third term in office.

During the presidency of Ilham Aliyev, allegations of high-level corruption, the subversion of the democratic process and the stifling of dissent have been rife. Reports of politically motivated arrests have risen drastically in the last two years. Opposition leaders are often arrested on spurious drug charges and sentenced to years in prison.

So as you might be able to tell – people were politely sceptical of the election results.

But the government of Azerbaijan shocked even their staunchest critics by releasing the election results a day before voting had even started. The results were released on the Central Election Commission’s official app for following the election and showed that President Ilham Aliyev was winning with 72.76% of the vote – a day before the first votes had even been cast.

Whether this was an embarrassing mistake, or just a massive middle finger to democracy by an autocratic government that doesn’t care anymore – it was a bit of a faux pas.

It is a time honoured tradition that autocrats and dictators stage a big old election every few years, which they win by a landslide. They do this so that they can claim a democratic mandate to rule, which is vital for even the most brutal leaders to be able to survive. Everyone in the world knows that they are lying, but they get to climb under the protective blanket of democracy and we all turn a blind eye – usually in return for preferential trade agreements or the suppression of anti-western groups. In the case of Azerbaijan there is a massive oil pipeline to Turkey and Europe which bypasses that sly old dog Russia.