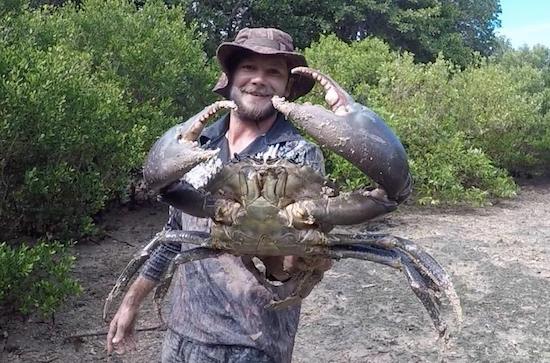 Rather him than me.

I’ve never been one for hunting animals, but I imagine if I was then I would stick to the usual ones like pheasants or fish or something. Nothing too scary or taxing.

I guarantee that I wouldn’t do anything like the Australian madman filmed in the video below. In it, the guy finds a sinkhole about 15 minutes from his house and dives down it like he doesn’t give a fuck, fully immersing his body in it trying to find crabs.

A few minutes later he emerges with a massive 10kg crab that could feed about 20 people. All hail Beau Greaves:

Yeah, I’m just saying I wouldn’t want to head down into that hole head first and go one on one with those claws and pincers, no way. And that’s not even considering what might have happened if he got stuck in the hole. Guy has got a goddamn death wish.

For more giant crabs, check out the coconut crab – easily the scariest crustacean out there.