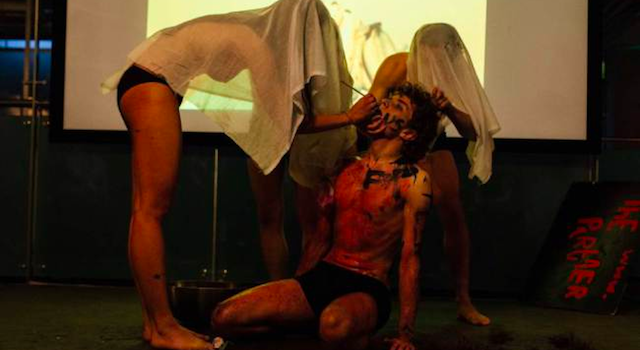 What a cop out eh?

Remember back in December when we talked about the art student who planned to lose his virginity live on stage for some cheap pops? Clayton Pettet’s plan was to have sex with an anonymous male man in front of art gallery crowds to demonstrate some new kind of artistic expression or something. Everyone got kind of excited/outraged about it back in December, and then promptly forgot about when it was actually happening because it was three months ago.

Turns out it happened a couple of days ago and was complete bullshit. Instead of actually having sex with anyone, he put on a 90 minute ‘interactive experience’ which included students holding up banners with sexual slogans. It sounds almost as pretentious as his original idea.

Clayton explained his thinking behind the piece as such: ‘It was always about me stealing the word ‘virginity’ – I will never have sex. My art is my sexuality.’ You’ve got to admit that even though this guy is only 19 he certainly sounds like he’s got a future in the art world by the way he talks like a pretentious wanker about stuff like this.

Unfortunately though audiences didn’t seem to enjoy his vision, with the Telegraph saying that it was ‘awkward, anti-climatic (lol) and only semi-erotic.’ I guess bad reviews come with the territory though, so he’s ticking two boxes for his future career already.

In case you forgot, he had allegedly been planning the event since he was 16 and said that ‘I’ve held on to my virginity for 19 years and I’m not throwing it away lightly. I have decided to use mine and the loss of it to create a piece that I think will stimulate interesting debate.’ Sounds to me like he just pussied out because he was scared it might hurt his tight butthole, you know?