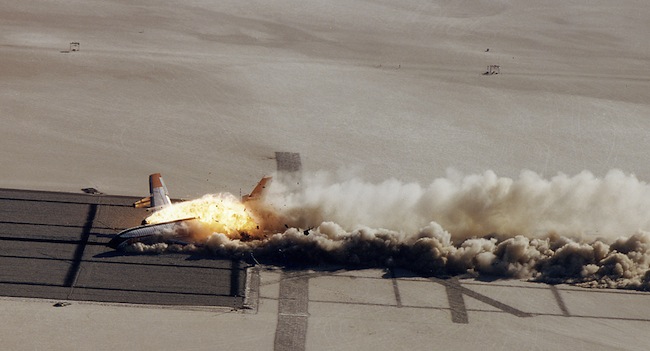 A security consultant in Germany has come up with a little doohickey that can hijack planes mid-air and make them misbehave. How comforting.

Technology! It’s amazing! Well sometimes it is,  but a lot of the time it’s bizarre and terrifying and innovation is now making enormous leaps with such dizzying speed that it’s only matter of time before someone switches on their iPad to check the weather and accidentally awakens Skynet in the process.

Case in point: a recent, and rather troubling precedent set by some bright spark who has decided to use his spare time to devise a smartphone app that can hijack an airplane’s navigation system and send the bastard thing crashing into the ground if said app user felt like it. What fun.

â˜› More Fun With Technology: The US Has A Laser Cannon

The man behind this delightful invention is Hugo Teso, a trained commercial pilot who now works as security consultant and has spent the last three years of his life researching and making the app, which has has decided to call PlaneSploit. Charming. This is already sounding like the plot of an action movie which involves Bruce Willis breaking down doors and shooting people in the throat.

Hugo showed off his little labour of love at the recent hacking conference Hack In The Box in Amsterdam, where a bunch of nerds all get together and gloat over the various ways in which they can ruin the shit out of everyone’s day just by fiddling with a keyboard or two. Thanks guys.