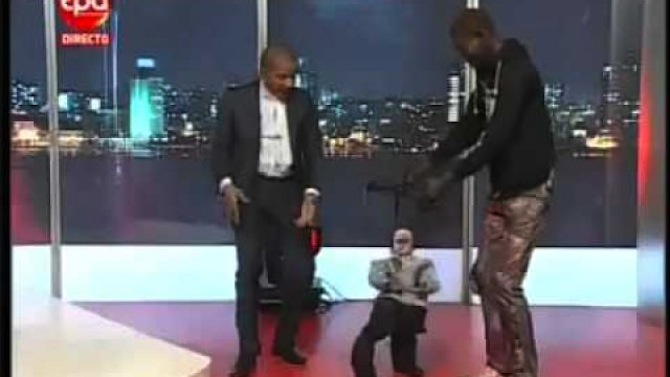 I’ve never really taken a massive liking to puppets. I’m sure at some point in my youth I saw/heard of one of those puppet shows, where fully grown adults put on ridiculous voices and fuck about inside a box with socks on their hands for the endearment of children. If I recollect, I wasn’t impressed at all — if anything I was a bit disturbed by it; my mum had attempted the same trick at home and all I could think was how cruel it was that she had stuck her hand up a small creature and how it would feel if someone did that to me. Okay, maybe I just didn’t give a shit but it seemed stupid all the same.

â˜› Next: Peter Crouch Brings Back The Robot Dance In Ibiza

Now despite my disdain for puppets I find this pretty cool. When I say cool I also mean really fucking weird at the same time. The video below basically consists of some guy on what seems to be an Angolan talk show manipulating a string puppet to dance like some chick molly’d off her face in a club, although I dare say this ‘guy’ has much more rhythm and is not teetering about like a plate of jelly wearing heels. I’ve got to give it Geppetto though, he knows how to make that puppet move, especially when it starts doing leg lifts and crotch shots in the hosts’ face.

â˜› Next: The KKK Are Broadcasting A Children’s Show With Catchphrase ‘Be White & Proud’