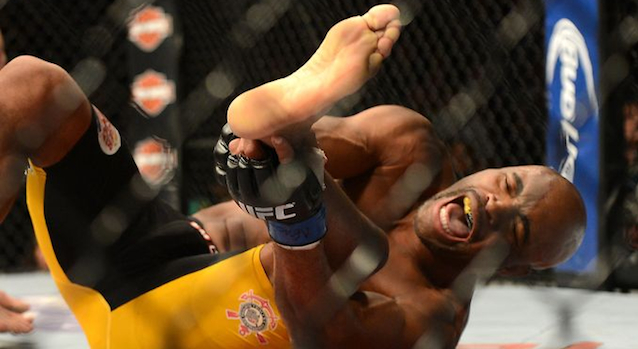 Legendary UFC fighter Anderson Silva’s career may be over after he suffered this horrific leg break in his match last night.

Last night at UFC 168 at the MGM Grand in Las Vegas, legendary UFC fighter Anderson Silva was going up against Chris Weidman in an attempt to win back the UFC super middleweight crown. Unfortunately, things didn’t go so well for Silva when in the second round Chris Weidman managed to check one of his vicious kicks with his knee which led to an absolutely horrific leg break for Silva. Seriously, I’ve seen some disgusting leg breaks in football matches but this one is all kinds of wrong. Don’t watch it if you’re squeamish.

More Leg Breaks: Is This The Worst Leg Break In Football History?

It looks like this could be the end of Silva’s UFC career as he turns 39 in April and this injury is likely to take over a year to recover from. If that’s the case, it’s a sad end for the man who many regard as the greatest UFC fighter of all time.

Chris Weidman paid his own tribute to Silva, and revealed that it was part of his game plan to try and weather the kicks and cause some serious damage to Silva by blocking them, although I doubt he wanted something as horrific as this to happen to him: ‘First of all, I just want to say that no matter what happened in this fight, he’s still known as the greatest of all time, and God bless him. That was the No. 1 thing I got hit with in the first fight and I was working on checking them a lot. I did think that if he was going to go that hard with the kicks, like he normally does, and I caught one on my knee, that I could really hurt him. It’s still crazy how that happened.’