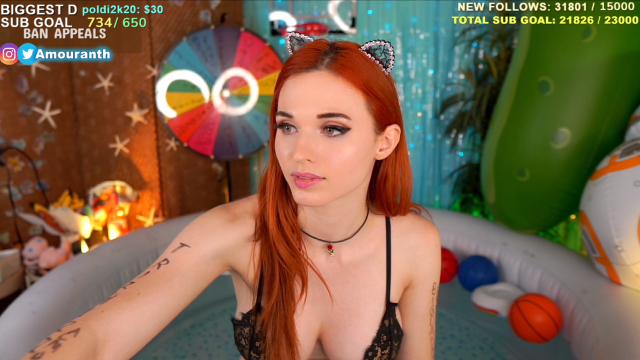 Kaitlyn “Amouranth” Siragusa is one of the most popular female streamers on Twitch, although she’s run into plenty of trouble on the platform before for ‘accidentally’ streaming NSFW content.

Well it looks like she’s in Twitch’s bad books again after the platform this week restricted her ability to make money from ads, which sucks for her because she’s been drawing a massive audience doing the “hot-tub meta” –  in which swimsuit-clad streamers talk to their chats, play games, and perform other activities from hot tubs.

Despite telling gamer site Kotaku that hot tub streaming was not against the rules, it seems Twitch has changed its stance where Sigarusa is concerned, as she explained on Twitter earlier:

This is an ALARMING precedent and serves as a stark warning that although content may not ostensibly break community guidelines or Terms of service, Twitch has complete discretion to target individual channels & partially or wholly demonetized them for

there’s something to go by. There is no known policy for what results in a streamer being put on this blacklist. With characteristic opacity, The only thing twitch made clear is that it is unclear whether or when my account can be reinstated.

Welp, maybe she could be a little more careful there, but it is kinda lame that Twitch don’t let one of their biggest streamers know specifically what she did wrong, if images like that are indeed the reason. The good news for Amouranth is that Twitch ads aren’t the only way she makes money from her online presence, but you can bet it makes up a pretty sizeable part of it.

For the (male) gamer who didn’t realise he was livestreaming and ended up having a wank in front of the world, click HERE. Mortifying.