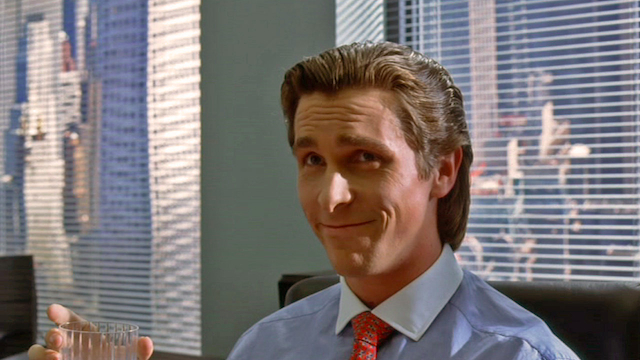 An American Psycho TV show sounds like it could be an interesting idea on paper – but then you actually hear the plot of the show and you want to shoot yourself.

I got all excited when I first read about this on Bret Easton Ellis’ Facebook page just now but after reading the whole press release my excitement soon turned to disdain. If you’re a regular reader of Sick Chirpse then you probably know that we’re all big fans of Bret Easton Ellis and his disconnected view of modern society and you might think that we would be excited about the prospect of an American Psycho TV show – especially one endorsed by Bret himself – but just wait until you hear what the setup for it is. I’m sure you’ll agree it only sounds like it will either a) be completely and utterly disappointing or b) a completely and utterly separate show with no real connection to the book.

Basically, the show is going to be set when Patrick Bateman is in his 50’s – although he’s still as ‘outrageous and lethal as ever’ – as he decides to take on an apprentice in order to create a new generation of American Psycho. I mean seriously? Doesn’t that just sound like the worst idea ever considering the source material and how entertaining that is?

On top of that it doesn’t even really make sense in the context of the books? If you’ve read them or even seen the movie it’s pretty clear that Patrick Bateman is a psychopathic loner who doesn’t care about anyone or anything except material wealth and status, so why the hell would he take an apprentice on?

Of course, the twist is probably that he plans to kill the apprentice after a while or set him up for some murders he’s associated with or something, but the apprentice will probably figure this out and the phrase ‘a deadly game of cat and mouse’ can be overused on all future television promos for it. I think that’s my main gripe with it – it just sounds so standard and uninteresting and cliched whereas Ellis’ work (at least originally) always stood out because it wasn’t any of those adjectives. It just seems like he’s cheapening his whole legacy by allowing crap like this to happen.

Having said that I’ll reserve all judgment until I’ve actually seen it, but my hopes aren’t high. It hasn’t even been greenlit by FX yet, although it sounds like it’s a pretty big deal and they’ll probably go through with it. They’ve got some guy called Stefan Jaworski – who doesn’t even have a Wikipedia page but seems to have directed and written a few Scandinavian shows that I’ve never heard of, and yeah I have actually heard of all the famous ones – to be the showrunner and that hardly fills me with confidence either. Still, maybe he could surprise me.

Critically, I think they may be forgetting that there was also a movie called American Psycho 2 which will have to be completely disregarded in continutity for this to make sense because Patrick Bateman actually dies at the beginning of it, when he starts to dissect a babysitter he’s on a date with but instead the baby stabs him in the face with an icepick. The baby later takes up his legacy when she grows up to be Mila Kunis and decides to kill everyone in her university class – which is run by William Shatner -in an attempt to get a place on an FBI training program.

Yeah, this movie really exists and it’s directed by someone called Morgan J. Freeman, who isn’t the real Morgan Freeman. Given how terrible this sounds maybe the TV show will actually end up being OK, at least in comparison to that sequel. If at first you don’t succeed….but maybe they should just leave Patrick Bateman alone until Ellis is actually ready to do something with him again. Just saying.