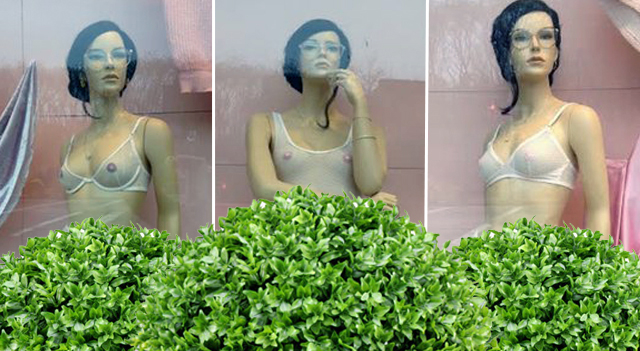 Always looking to push the envelope, American Apparel’s latest publicity stunt might be one step too far.

American Apparel is always edgy, cool and pushing the envelope, but this is just kind of weird.

Over in their flagship New York store on East Houston Street, they decided on Tuesday to put up a female underwear model with a substantial amount (to say the least) of pubic hair. A spokesman for the company said that the models are trying to ‘convey the realness and rawness of sexuality’ and are aimed at drumming up sales around Valentine’s Day. And it seems like it’s already working, as a whole bunch of people crowded around the store to check out the mannequin’s pubes and take photographs of it and with it (why!?) and it stands to reason that at least a few of these people will go in and buy the underwear.

I’m not sure whether they use pubic hair in their advertising (remember when they released a t-shirt of a menstruating vagina with pubes last year? That was real cool too. Not.) for shock value or as a powerful statement about female empowerment (or both, probably) but I still think it’s kind of weird and uncomfortable. In any case, it seems to be working, and I guess at least some part of the thinking behind it is to break down walls so that I don’t feel uncomfortable about these things any more. Let’s see how that works out.

Check out the mannequins with pubes on the next page: