How would you punish someone who robbed off you? Would you go as far as these Bolivian villagers?

When I was a lot younger our family home got burglarized, it made me so angry I wanted to puke. They did a turd on the floor and took a leak in my little brother’s toy cupboard. I was raging. I would have happily set fire to the perpetrators and gleefully giggled as their eyeballs burst in the heat. That said, I’ve got a feeling that if I was actually given the chance to carry out my wishes, in the cold light of day my punishments wouldn’t have been quite so harsh.

In the Amazon jungle however, robbers get what’s coming to them, and then some. This week a couple of Bolivian motorbike thieves got some pretty rough justice from a bunch of villagers who they’d wronged.

The villagers from Ayopaya, western Bolivia lashed the two boys (18 and 19-years of age) to trees that were teeming with deadly fire ants. They didn’t just give them a few hours of pain though, oh no. These villagers were proper angry and held them there for two or three days. Being lashed to anything, with or without fire ants, for any number of days would be bad enough.

These particular ants – pseudomyrmex triplarinus – live on the triplaris tree and defend their homes with vigour. So these poor thieves were treated by the ants as invaders of their parish and bitten to bejeezus. Here’s someone’s arm after a very mild and momentary fire ant attack in Texas:

â˜› Read Next: Medieval Torture & Slaughter: The ‘How To’ Guide 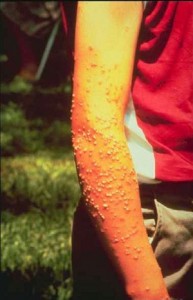 So you can imagine what three days worth of attacks across the whole body might be like. Brutal.

The boys weren’t released from the villager’s grip out of good will either, they ransomed them. The sister of one of the robbers said that they had to produce the equivalent of £2,200 to buy them out of their predicament; that’s around  three years worth of wages in Bolivia. The sister knew that if she didn’t come up with the goods the boys would be left to die.

Once they were released they were immediately hospitalised. Dr Roberto Paz, of Bolivia’s Cochabamba hospital, said one was in intensive care while the other needed dialysis for kidney failure. Those ants don’t muck about, and neither do the Bolivian jungle folks either.

The villagers said they needed the money to replace the motorbikes. Fair enough I suppose. Moral of the story: don’t steal from a Bolivian jungle dweller.