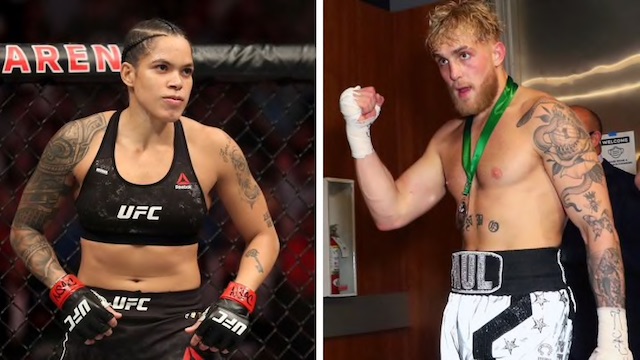 The last couple of weeks we’ve heard a lot about Jake Paul trying to fight Conor McGregor following his knockout of Nate Robinson, culminating in the disrespectful video that was doing the rounds on Monday morning.

McGregor has remained quiet on the matter, but this hasn’t stopped Nate Diaz and Dana White both wading in with UFC Boss white saying that he isn’t really entertaining the guy but was thinking about giving him to Amanda Nunes for a fight. For those who only have a casual knowledge of UFC/MMA i.e. McGregor or Khabib, then it’s worth noting that Amanda Nunes is one of the hardest females to ever hit the octagon having scored knock out victories over both Ronda Rousey and Cyborg in about a minute and is currently both the women’s flyweight and bantamweight champion.

In short, she would probably beat the absolute crap out of Jake Paul given the chance and what’s more is that she also revealed that she’s completely up for it as well:

Oh boy. Although it’s unlikely that anyone would ever sanction a fight between Nunes and Paul, I bet that it would draw a hell of a lot of PPV buys because who wouldn’t want to see that snotty little punk get his ass handed to him by a woman? Maybe not as many as would like to see McGregor do it, but still a hell of a lot I reckon. Hopefully someone out there can make it happen and Jake isn’t too much of a pussy about it either. Please?

For more of the same, check out Ronda Rousey’s coach begging Nunes to go easy on her. That’s just how much of a beast she is.