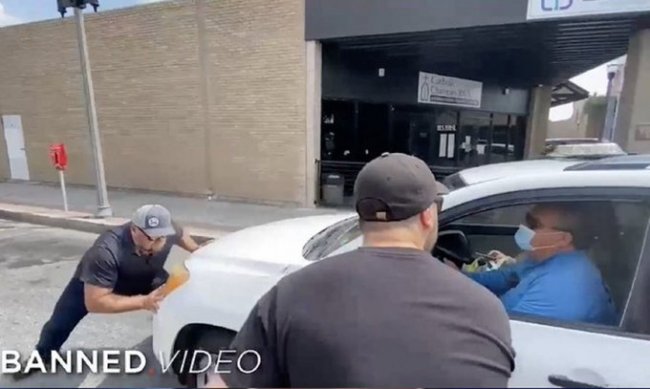 I haven’t paid attention to anything Alex Jones has done in a long time – and barely did before that – but I did notice one of my more shall we say ‘paranoid’ friends sharing a video of him finding some smuggled migrant children in the back of a vehicle at the US border recently and thinking that it was kind of a weird thing to be sharing.

The full video – which you can see below – features Alex apparently stopping some smugglers from kidnapping migrant children by jumping out in front of a vehicle to save them just before they cross the border. He then makes the border guard open the back of the vehicle to find the children inside.

They allege that the children were taken from a dirt floor child camp under the International Bridge in McAllen, Texas before being taken to a processing plant in another Texas town called Donna. They were then moved to a coronavirus processing centre back in downtown McAllen, before being taken by the Catholic Charities of the Rio Grande Valley.

It was here that InfoWars claim they ran into them:

When the crew was walking to the Christian Charity center near the bus station, they witnessed five children and an adult exiting the center and being loaded in a white hatch back car.

Three of these children were loaded into the luggage compartment where no seat belts were present. This video picks up where the crew sprung into action.

Infowars and Alex Jones are claiming that the Catholic Charities of the Rio Grande Valley provide illegal migrants with a plane or bus ticket to a city of their choosing and a debit card with $1200 on it. They then help to transport them across the border or to the airport/bus station.

To be honest, that all does sound to me like it could very well be true, but the big problem with this whole video is obviously that these InfoWars guys were just hanging around and saw this happening and were able to set up a full film crew just like that and get this very professional looking footage. I think this tweet probably sums it up the best:

Yeah, when you think about it there’s no real way that can be real is there? It’s about as real as the Bossman stealing Big Show’s dad’s coffin or HHH having sex with Katie Vick’s dead corpse. There’s no way it’s real and it’s just as stupid as one of those angles, especially when the protagonist in question has a track record as sketchy as Alex Jones. Think about it.

For more of the same, check out Alex Jones going ballistic at a bunch of teenagers enforcing Covid rules in a park. Useful.