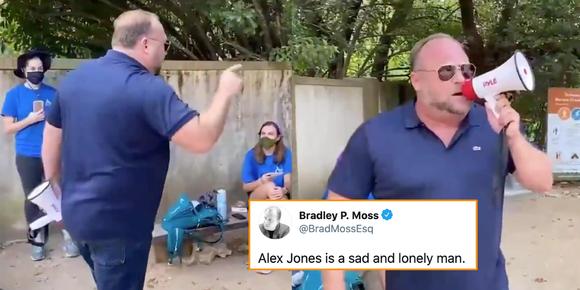 It’s been a while since we checked in with Alex Jones and it looks as though he’s still the same old lunatic ranting and raving about conspiracies and hoaxes and whatnot.

Since reopening on August 8, the Barton Creek greenbelt in his native Austin, Texas, has required that people who want to visit the park from Thursday to Sunday make a reservation in an attempt to limit large gatherings and the spread of COVID-19.

Well Alex Jones, who is an anti masker (duh), was not having it whatsoever:

I checked to see why Alex Jones was trending and was not disappointed pic.twitter.com/EkSmcJzUlP

Lol. So it sounds like Alex Jones’s wife went to the park earlier that day but was turned away because she didn’t have a reservation, and so Alex Jones turned up to yell at a bunch of languid, millennial lifeguards about how the park is public land and requiring him to make a reservation there is messing with his freedom.

To be fair I agree with him that having to book a reservation at the park is ridiculous, no matter how well-intentioned. But showing up to scream at a bunch of baffled teenagers working minimum wage who probably have no idea who he is? Classic Alex Jones and hilariously so. Never change, Alex.

To watch another anti masker throw a tantrum inside a supermarket and have to be carried away by son, click HERE. How embarrassing.