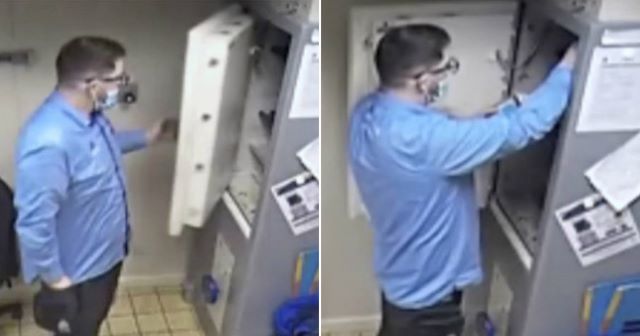 The rest he wasted.

An Aldi employee in Newcastle has been caught on camera stuffing more than £12,000 in takings down his trousers, which he then blew on drugs and prostitutes, reports the Metro.

Steven Pyle, 34, was apparently suicidal at the time, and says he stole the cash in a bid to ‘go out with a bang’, two days after unexpectedly handing in his notice.

Steven was actually pretty smooth when carrying out the theft, but on closer inspection you can sort of make out what he’s up to:

He might’ve got away with it too, except a G4S security guard noticed three bags were missing when emptying the safe.

G4S counted the bags and noticed there were 22 but the computer said there should be 25. There was concern three bags were missing.

They looked at the CCTV where Mr Pyle was the person who was dropping the cash bags in.

On closely looking, the defendant seemed to mark up the bags as normal but instead of dropping them in the safe as she should, he seems to conceal them in the front of his trousers while his back is turned away from the CCTV camera.

Pyle, who had an £150-a-day cocaine habit (!), was battling life as a ‘functioning drug addict’ and had come close to suicide but has since sought out help, Newcastle Crown Court head.

Judge Matthew Happold warned Pyle he was ‘very close’ to going to prison. He sentenced him to six months behind bars, suspended for a year, telling him:

Instead of putting cash bags into the safe, you put them down your trousers at the Aldi store in Stamfordham Road, Newcastle.

The pre-sentence report says at the time you had decided to take your own life and you wanted to go out with a bang.

You took the bags with the intention of replacing it with your gambling winnings.

The report says you essentially blew it on drugs and prostitutes.

Which I guess isn’t a bad way to spend £12,000 if you plan to ‘go out with a bang’, except he eventually realised life was worth living and so now has to deal with the consequences of stealing 12 grand from his employer. Seems he’s had a real touch with that suspended sentence though, so I’d be counting my lucky stars if I were Steven Pyle right now.

Yeah OK he also has to complete 80 hours unpaid work and go to a bunch of rehab sessions, but that’s a pretty sweet deal compared to the alternatives. Maybe he can become an MP once this is all said and done? Sounds like he’d fit right in.

To meet the Hull man who was ‘disgusted’ after buying out of date pastrami at Aldi, click HERE. You would be too, to be fair.