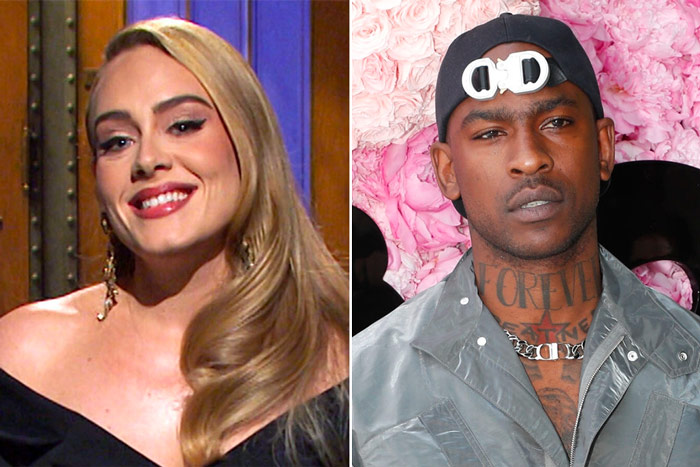 She’s moved to quash the rumours.

I can’t think of a stranger celebrity coupling than Stormzy and Adele – maybe Cameron Diaz and the guy from Good Charlotte? – but these were the rumours that were flying around today that meant the ‘Rolling In The Deep’ singer actually felt the need to come out and clarify that she’s still single.

The rumours first began late last year, but now an unnamed source has reportedly told The People that the pair are now very much an item. Here’s what this unknown person had to say:

Things have been heating up in recent months.

They run in the same circles in London, and she’s having fun.

Must be true right? Especially the part about her haveing lot of fun rocking around with Skepta as well – that guy looks as if he knows how to have a good time and you can’t imagine that Adele’s spent most of her life staying up partying until the break of down. time for her to let her hair down now she’s divorced.

In fairness, their relationship isn’t as completely out of the realms of possibility as it might seem at first glance either. The pair are known to have been really good friends for a while now and share a lot in common with both having grown up in Tottenham, both having massive music careers and both being parents to young children.

I don’t know if that’s enough for us to believe that they’re dating though, especially as Adele has moved to quash the rumours with the following Instagram post:

Had the best time on SNL! Thank you to the most wonderful cast, crew, writers and producers. What a sublime bunch of people you are. Lorne thank you for believing in me! Lindsay my sister for life, Maya my comedy and Mama hero! Plus the so up for it audiences at both the dress rehearsal and live show! I did it for the joy of it and I hope you got some from it too! Good luck with the election America I love you so much. Look after each other and go easy on yourselves. Happy Halloween! I’m going back to my cave now to be the (single) cat lady that I am! Peace out til next year ♥️

Yeah, pretty sure the emphasis there is on the fact that she’s single and is a not so subtle way of letting everyone know that. Would be great to see them together though – can you imagine the pair of them showing up to the Grammys or The Brit Awards? Such a sick vibe.

Thinking about it, the fact that these rumours have been going on for over a year kinda makes me think that they’re true, sorta like how Jamie Foxx and Katie Holmes were rumoured to be dating for years before they finally admitted it. I suppose they had the spectre of Scientology over them, so what’s Adele and Skepta’s excuse? Stay tuned.

For more of the same, check out Adele dropping an A+ meme on Instagram to celebrate her divorce. That’s my girl.