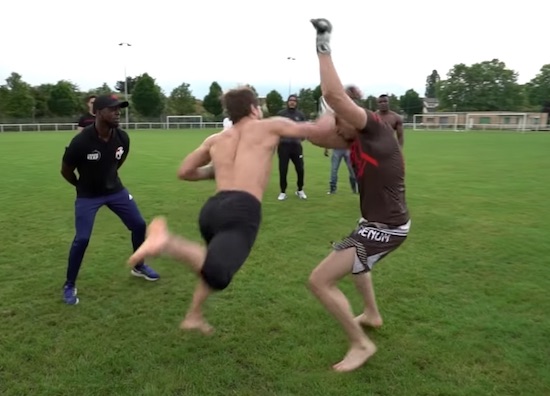 The new generation of street fighters.

Street fight videos have been around for as long as the internet pretty much, but they’re usually a bumbling affair where the fighters have no real skillset and just mindlessly tear into each other.

That’s obviously still very entertaining but street fights seem to have reached the next level with this collective from France, who are having highly skilled MMA/UFC fighters go at it against one another on a football pitch of all places. And let me tell you, they know how to take a punch and throw down:

Daaaamn. I dunno which fight was more brutal, but I’m gonna tell you I was surprised by the guy who managed to beat the black guy – he didn’t look anywhere near as tough as him at the start but he ended up completely dominating him.

The little guy was a crazy wrestler too – not sure why he didn’t just keep him in that armbar when he had him in it the first time, but I suppose he ended up winning anyway with it later so it didn’t matter too much. Hope we get to see more of this soon as well, it’s crazy.

For more of the same, check out the best one you’ll ever see. No jokes.