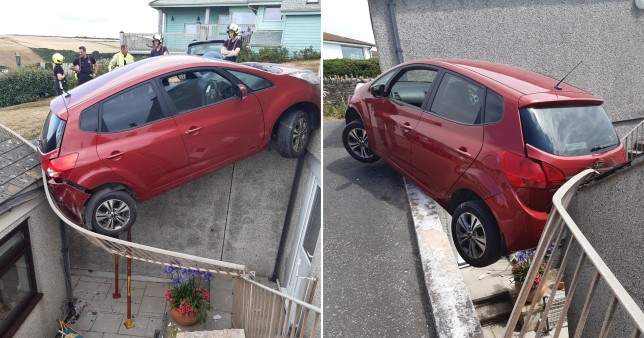 How did this happen?

Sometimes you see a picture and just have to wonder how on Earth things have ended up that way and this is definitely one of those times.

Somehow a red Kia has become wedged perfectly between two buildings after the 87 year old pensioner who was driving it reversed off the edge of a slope after she was trying to park it. She must have been going at the perfect speed for it to fly off and get wedged between two buildings. Probably couldn’t have done made that jump if she tried all day deliberately.

Anyway, you might have thought that he car being in such a precarious position would have led to it getting written off or something, but thankfully the fire service were able to pull it out with a few winches and other equipment.

Interesting afternoon. The 87yr old driver who had been out for her birthday meal had a little mishap. Crews from Ivybridge and The heavy rescue tender from Middlemoor attended.
2 acrow props, 2 tirfor winches and a powered winch brought the vehicle to safety. No injuries!! pic.twitter.com/hqq2A20tEh

Wow I guess that’s pretty great that they managed to sort that out fairly easily? Kinda crazy that they have that equipment just lying around in case some idiot does something like this and also kinda worrying that they had to spend loads of time sorting it out when there might have been some real dangerous situations elsewhere that required their attention. I suppose it was in Plymouth though – not much going on down there so this was probably the most eventful day of the year for them. Hope they enjoyed it.

For more of the same, check out this car drive into a flood and then catch fire and explode. I didn’t think that happened in real life.