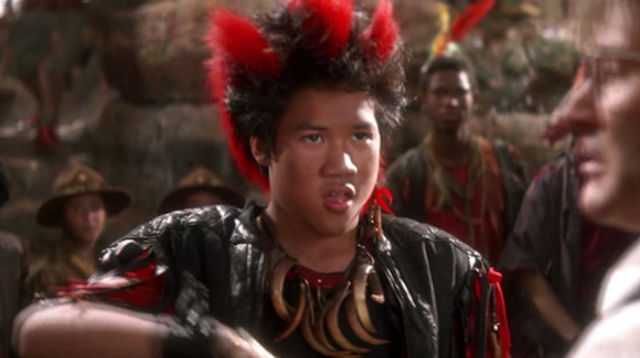 Why anyone thought this would be a good idea is beyond me because it’s kind of like watching a train wreck.

Remember Rufio from Hook? Of course you do, he’s one of the most memorable characters and definitely the best in The Lost Boys. It’s kind of surprising that he never went on to do anything else considering he was so cool in Hook, but hey, I guess that’s show business.

I doubt anyone has ever really thought about the actor who played him – a guy called Dante Basco – in the past few years even as he faded into irrelevance, except for these guys from some YouTube company called Homemade Movies who had the bright idea to film him recreating his iconic death scene from Hook, only now as a 38 year old. It probably wasn’t that hard to convince him to take part, considering he’s pretty much unknown now he probably agreed to do it for a beer or something.

The resulting footage is pretty spectacular in a watching a train wreck kind of way. I just can’t really understand why anyone would think this was a good idea? I mean sure it’s funny to laugh at, but surely Dante Basco must have thought it was actually a cool thing to do when he signed up for it, and a 38 year old man should really be able to make better decisions than that.

There’s a behind the scenes video too (why!?!?) and one that shows both scenes next to each other, which is kind of cool even if it only really exists to illustrate how completely budget and lame the new version is.