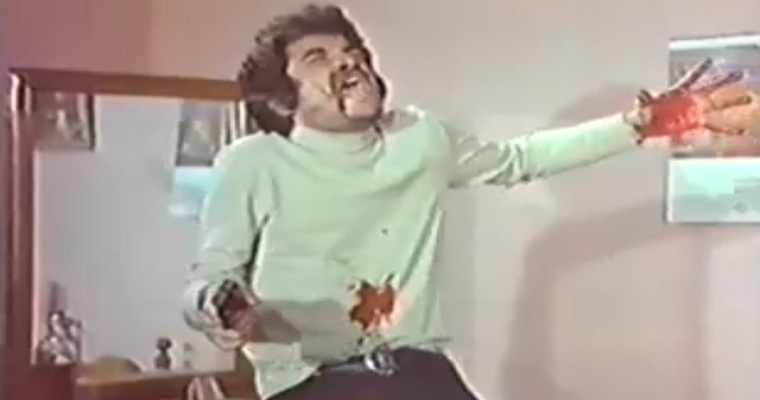 By worst death scene I don’t mean most gruesome or most shocking, but genuinely the most badly filmed death scene ever. In this scene from ‘Kareteci kiz’ aka Karate Girl, the bad guy gets shot several times before finally dying a slow and over-dramatic death. Granted it was made in 1974 but i’ve seen better special effects at my little sisters school play. It takes this guy at least 10 seconds to start bleeding after being shot for the first time and it doesn’t take a keen eye to see how they achieved the bloody effect. It’s also quite distracting that he resembles Mr Bean in a big way, minus the Charles Bronson moustache.

The thing is, it’s so bad that it’s actually good. Plus, it’s Turkish so they have an excuse. It probably didn’t intend to be funny but watching the man throw himself around the room wearing a rather fetching polo-neck and screaming like this sheep is just entertaining. As far as low budget films go, I’m sure it’s not the shittest thing you’ve seen when you’ve switched on the TV at 4am and started watching the first thing that comes on having lost any sense of standards. It’s even got a 6.2 rating on IMDB which means that people rated it higher than Twilight – Make of that what you will.