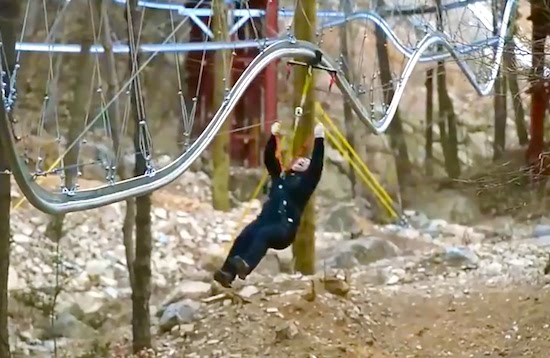 I’ve always found ziplines particularly terrifying – I’m not really sure why as they’re completely safe and not even that long or anything. I guess it’s because your legs are just dangling and there’s always the feeling that you might end up falling out your harness and breaking both of your legs.

Considering this fact, despite my love of rollercoasters, I’m not sure that I could face going on this new zipline rollercoaster. It’s basically a zipline that goes super fast and has loads of bumps and fast curves that makes the whole experience even more rocky and scary. Take a look at it in action below:

Looks gnarly huh? And also dangerously unsafe in a way that most rollercoasters just aren’t. It also looks like it’s gonna bang you around and hurt you a bit. I suppose that’s part of the appeal though too?

Also gotta give whoever did the soundtrack props too for putting on the stupid inspirational music that’s like something out of a children’s action movie. Definitely got me inspired to go on it after that, and it’s not that high off the ground so maybe I’ll be able to conquer my fear and check it out. Gotta figure out where it is first though.

For more of the same check out the world’s largest urban zipline. Definitely not trying that any time soon.