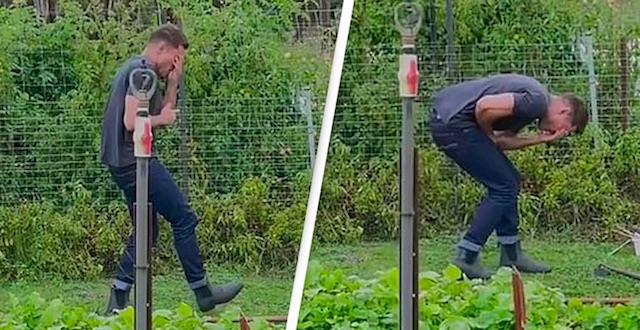 Who left that rake here?

When it comes to old fashioned sight gags, stepping on a rake and having it smash you in the face is probably second only to slipping on a banana peel in terms of cheesiness, but they’re still always pretty funny when you do end up coming across one.

This latest attempt at one comes courtesy fo Zac Efron, who was filming a new episode of his Netflix show ‘Down To Earth’ with wellness expert Darin Olien which sees the pair seek out healthy and sustainable ways to live their lives. This saw the guys make their way to some kind of allotment where presumably they were going to grow their own vegetables or something.

OK, so I don’t think that the rake actually hit him in the fact there and your boy Zac Efron was just ‘acting’ that it had, but it still looked pretty realistic and was still kinda funny. I guess you just gotta take advantage of any time you get access to a rake now hey? Seems like those instances are few and far between really these days doesn’t it?

For more of the same, check out when Zac Efron tweeted about Martin Luther King day and Twitter absolutely destroyed him. Damn.