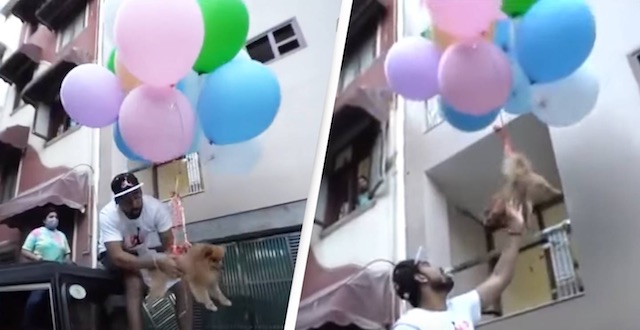 The desire to be a famous YouTuber has led countless people to attempt ill advised stunts/pranks that aren’t really even worthy of that description and defy all explanation as to why they were even attempted in the first place and the latest one of these comes courtesy of a guy called Gaurav Sharma over in Delhi.

Sharma thought that it would be a good idea to prank his dog by tying balloons to his pet dog and then letting him go and float off up into the air next to an apartment building. Obviously this is pretty abhorrent behaviour as the dog would be absolutely shitting himself in that situation and Sharma was thankfully reported to the police for animal cruelty shortly after his video was uploaded.

Sharma was arrested and Atul Thakur, Deputy Commissioner of Police (DCP), said the following in a statement:

The complainant alleged that a person by the name of Gaurav Sharma had made a video where they were seen to have tied their pet dog with helium balloons and later they let loose the balloons thereby making the dog fly in the air and hence, risking its life.

#JUSTIN: A 32-year-old YouTuber arrested from South Delhi’s Malviya Nagar on the charges for cruelty to animal. During questioning, he told the police that he is a youtuber and he made this video for that purpose only – said DCP (South) Atul Thakur. @IndianExpress, @ieDelhi pic.twitter.com/XX6uiEdKVW

After his arrest, Sharma made another video where he apologised for the incident saying the following:

Before making the video, I had taken all the safety measures.

I had said this in the video but did not upload this part as it would’ve increased the length of the video. It was a mistake on my part.

All I want to say is that I had made the video with all the safety measures.

I think he’s kinda missing the point there? I don’t think people were upset with the video because it looked unsafe, but because they were absolutely distraught at watching the poor dog being put through such a traumatic experience.

What an asshole. I hope he lost some of his 4 million subscribers but it seems unlikely as they probably just lap dumb shit like this up without thinking about the consequences. Jerks.

For more of the same, check out this kid trying to prank his Iranian dad by cutting his bear whilst he’s asleep. It did not go well.