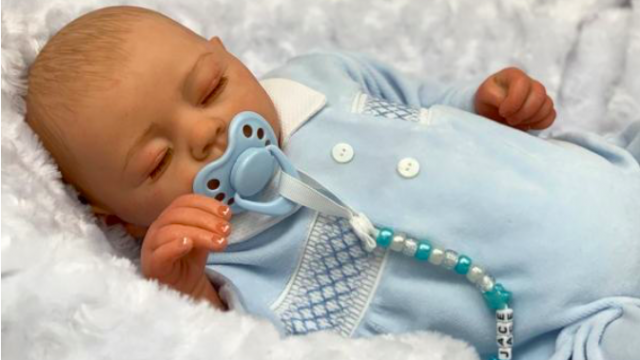 Just when you thought YouTube couldn’t get any weirder.

There’s absolutely no doubt in my mind that the rise of video and YouTube communities over the past few years has turned the world into a much much weirder place and it’s getting weirder every single day.

Case in point: this story about a YouTuber family that are so famous and clearly have no morals that they’re cashing in on their popularity by selling a doll version of their own baby. Is it just me or is that completely utterly and creepy, not only on the part of the parents but also on the fact that people love this family so much they actually want a doll of their baby to cuddle and play around with or whatever? Isn’t that just completely weird?

Anyway, if you’re wondering who would do something like this then look no further than the Ingham family who have garnered an impressive 1.2 million subscribers on YouTube by chronicling the lives of themselves and their four children. Who the hell is tuning into that crap?

Here’s how they announced their new venture:

This was made to represent Jace when he was two weeks old, similar to the age in the photo that you will receive on the birth certificate if you buy one of these beautiful baby Jace dolls.

I can’t believe how like him it is. It’s exactly the same. Especially when Jace has his hat on, it’s so cute. This is little Jace and there’s going to be 250 of these made. That’s all. Once they’re gone, they’re gone.

So goddamn weird. Can’t get over why anyone would want to be involved in this at all, yet there’s probably at least 300 people who think this is a good idea if you include everyone who has bought one (imagine it’s already sold out) and was involved in the manufacture of it. Baffling.

For more of the same, here’s a YouTuber who snogged his sister in a prank. Why? Who is he pranking?