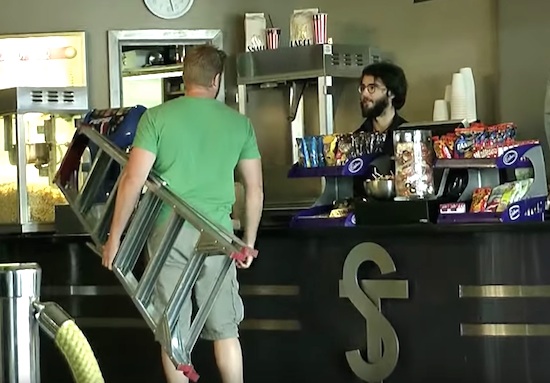 When you see someone with a ladder under their arm, you automatically assume that they’re doing some kind of shitty job that you absolutely don’t want to be doing yourself, so you kind of just let them get on with whatever they’re doing without questioning it at all. Think about it – you definitely do.

Comedians Troy Kinne and Steve Filp wanted to put this theory to the test though and decided to carry a ladder under their arm all day and try and get into a bunch of places that would normally require a fee or some air of authority to access. Needless to say, when you’re holding a ladder then these barriers to entry completely disappear:

See? I thought he was gonna get busted when he screwed up the name of the cinema but he still managed to style it out thanks to that ladder – it’s the ultimate deal breaker.

Although the ladder is such a sick way to get into places, the fact that have to carry a ladder with you all the time kinda negates it, so overall it probably isn’t worth it unless you really, really want to get in somewhere. Remember it for your moment of need.

For more ladders, check out this guy falling off a ladder when he was live on Sky Sports News. Muppet.